Marnus Labuschagne, David Warner and Travis Head targeted the left-armer on a chastening second day of the match which saw the Somerset spinner concede 95 runs from just 11 overs.

He did dismiss Labuschagne on 74 following a poor shot from the Australian and only conceded seven runs from his two overs on day three. 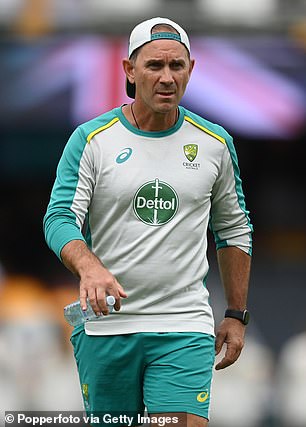 But Leach went at nearly eight runs per over as Australia made 425 in their first innings at the Gabba and put themselves in a commanding position to take a 1-0 series lead.

And speaking to Seven Cricket, former Australia coach Langer hinted they have a ‘massive competitive advantage’ in the Ashes because they have ‘world class’ off-spinner Nathan Lyon – who has 399 Test wickets to his name – in their line-up.

Langer went on to state Leach and Dom Bess – who has impressed for England Lions against Australia A – are still ‘quite young’.

‘One of the things where we have a massive competitive advantage is we have a world class spinner,’ he said.

‘Jack Leach and Dom Bess, they’re still quite young spinners. We want to put them under pressure. And then get England thinking about what their selection strategy is going to be. ‘We know how important a spinner is in Australia. England like to have four quicks a lot of the time in England.

‘So hopefully if we maintain that aggression, it’ll get England thinking about their selection.’

Leach is playing in his first Test match since the tour of India in March, having played no part in the summer series against New Zealand or against Virat Kohli’s men.

But he was selected ahead of fast bowler Stuart Broad at the Gabba, but now could face pressure on his place after Bess took four for 80 from 23 overs at the Ian Healy Oval.