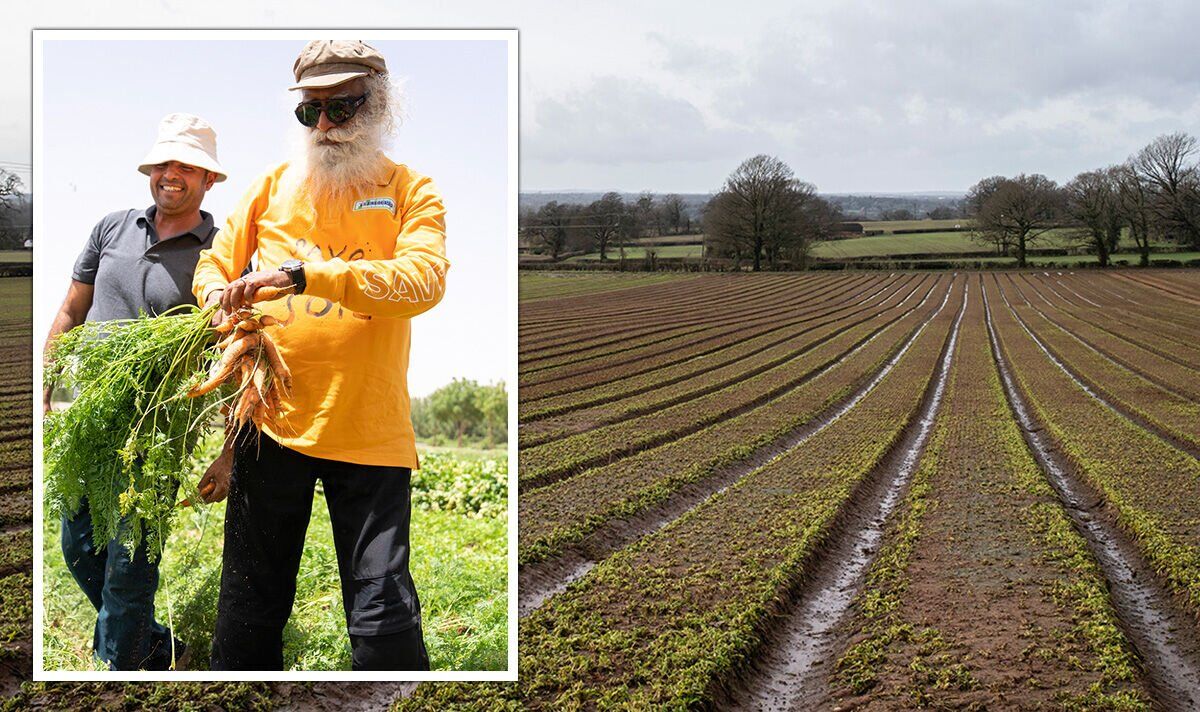 The UK Government needs a “committed approach” to saving the UK from running out of harvests, spiritualist and campaigner Sadhguru has said. In an interview with Express.co.uk, he offered his own plan that does not require new technology or “trillions” in spending, but would boost farming productivity at a time when food prices are soaring.

Government ministers have already admitted that Britain is a handful of decades away from crop devastation, and experts predict that the nation may have less than a hundred harvests left.

The guru to the stars warned that “if for just three days there is no food on the street, all pretensions of civilization will go”, adding that civil wars over food could happen “anywhere”, including Europe.

In a wide-ranging interview, Sadhguru stated that action to improve the state of topsoil used for agriculture now would avert catastrophe – and could reduce our carbon emissions by 40 percent.

In 2017, then-Environment Secretary Michael Gove warned that the UK was 30-40 years away from “the fundamental eradication of soil fertility”, adding: “Countries can withstand coups d’état, wars and conflict – even leaving the EU – but no country can withstand the loss of its soil and fertility.”

Modern farming practices are believed to removing more organic matter from topsoil – of which 3 percent is necessary to sustain a healthy crop – than they are putting in. As farmers’ margins are squeeze as costs rise, many are attempting to extract more out of the land they have to make ends meet.

In the Government’s draft of the Environment Bill, it suggested a better understanding of the UK’s soil degradation was needed “that could inform a long-term soil target”. But Sadhguru said that increasing the organic content of soil now would have a bigger impact than if it were delayed.

“That means four or five generations will go through terrible states of life because of the weak condition of soil. That is why the urgency.”

He called on the Government to set a 3 percent minimum organic content target and provide “attractive” incentives to farmers to facilitate this change. The celebrity influencer said supermarkets should stop labelling food as organic “as if the other foods are inorganic”, and give a different place on shelves to food that has been grown in organically rich soil, as it will have multiples more nutrients.

On how to improve Britain’s soil, Sadhguru suggested: “One simple way of doing this is by having cover crops. Every farmer knew that land must always be under cover just 50–60 years ago. We have acquired these bad habits only in the last 30–40 years.

“For example, in India, it used to be common practice during the summers to always have a legume or pulse crop. Everyone knew that they would not get much yield from it, but it was left there to cover the land. When the rains came, the crop was ploughed back into the land.”

He added that this would “easily” return between two and four inches of rich, organic matter to the soil every year. “Yes, this is a global-scale disaster, but it can be turned around simply with a committed focus. It does not need any absolutely new technology or trillions of dollars.”

Parts of Africa has already seen civil unrest due to a lack of food, and Sadhguru believes no part of the planet will be immune: “The World Food Programme predicts that by 2035 there will be dozens of civil wars because of food shortages.

“It could be anywhere – in Europe, Asia and Americas and Africa. There could be famines in Chicago. If for just three days, there is no food on the street, all pretensions of civilization will go. Not only civilization – humanity itself will evaporate.”

While politicians have been quick to set carbon emissions targets – a “very important part of the issue” – he believes soil degradation is “the real problem”.

Sadhguru – who counts Will Smith and Matthew McConaughey among his followers – explained: “If we raise the soil organic matter, most of the other ecological issues will start moving towards a solution, because soil is a very significant carbon sink and the largest water soak on the planet.

“Soil has always been the major carbon sink on the planet, but now a lot of it is in the atmosphere where it should not be, and it is causing global warming. The same soil which can take in carbon dioxide from the atmosphere is now releasing it, simply because we are leaving the land ploughed and open, without any microbial activity.”

Sadhguru is quick to state that the nutritional content of food in today’s world is a shadow of what it was a century ago.

Though soil may not be a sexy subject, he vaunts “the benefits for the nation in terms of the man-days gained, productivity and creativity when there is less stress on the healthcare system”.

The Department for Environment, Food and Rural Affairs was contacted for comment.