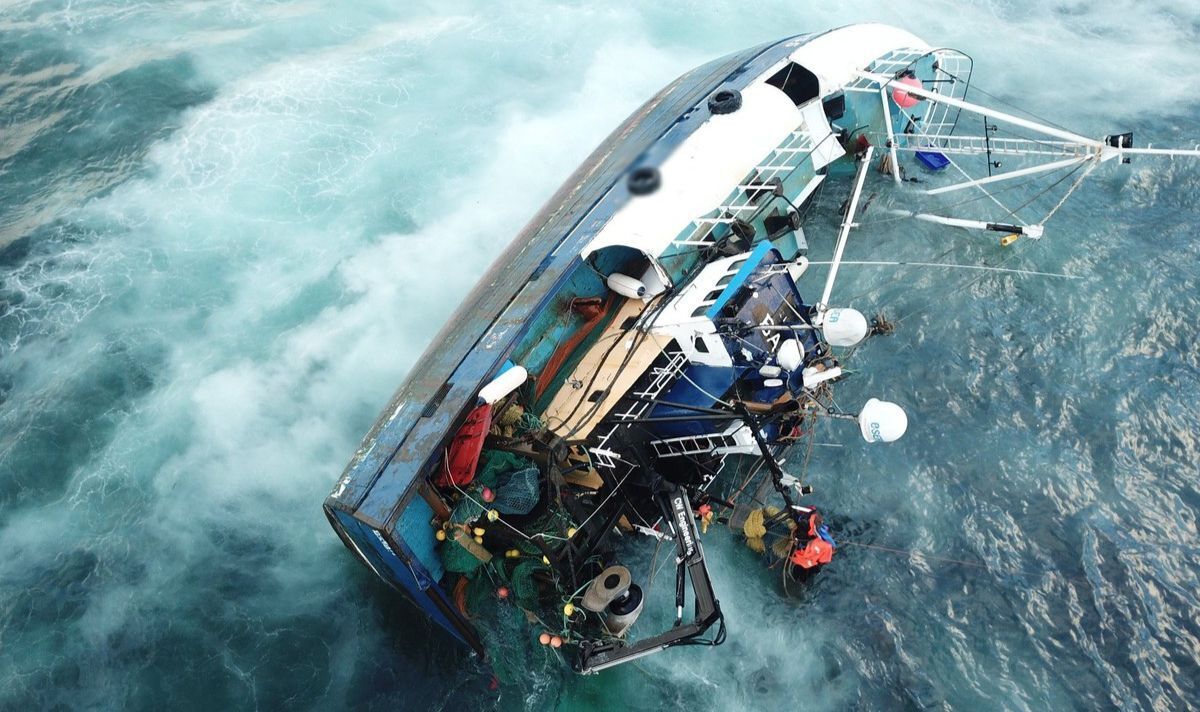 This is the dramatic moment a Scottish vessel begins to sink below the waves when it ran aground and flipped on its side after hitting a notorious “black spot” in the North Sea. RNLI Fraserburgh Lifeboat Station in Aberdeenshire were alerted at around 5.50am on Monday to The Ocean Maid BA55 getting into difficulty at Cairnbulg Point. The lifeboat rushed the scene, with Coastguard teams from Peterhead and Fraserburgh also scrambling to the stricken vessel.

It is understood The Ocean Maid BA55 went aground at a black spot which has left many ships wrecked over recent years and happened just metres away from where the Sovereign, went aground in 2005.

Dramatic photos show the ship completely submerged and flipped on its side in the dark, rough early morning waters. Its contents are seen spilling out onto the sea.

Footage shared on social media also shows waves crashing over the stricken vessel as it floats near a body of rocks.

Rescuers managed to get all four of its crew members to safety after they quickly abandoned their boat for a life raft when they realised they were in danger.

The fishermen were taken to Fraserburgh before they were checked over by the Scottish Ambulance Service.

They are believed to be safe and well, while it is understood the crew members were not seriously injured.

On Monday, the coastguard said its teams were keeping a close eye on the vessel, which appeared to be sinking below the waves, but that there are no signs of pollution.

A spokesperson for RNLI Fraserburgh Lifeboat Station said: “We were requested to launch by HM Coastguard this morning and responded at 5:56am to a fishing boat that had run aground beside Cairnbulg Beacon.

“The boat’s crew of four took to a life raft and were then picked up by the lifeboat which brought them ashore.

Last month, a dog was rescued by the RNLI after plunging 100ft off a cliff above St Mary’s Bay at Torbay in Devon. Yogi fell during a walk with his owner Emma Linehan on the cliffs, with a lifeboat crew finding the spaniel cowering and soaking wet.

He was carried on board the vessel by the emergency team and taken back to shore to be reunited with his owner. The spaniel had suffered a fractured spine and ribs, nerve damage, and an injured eye.