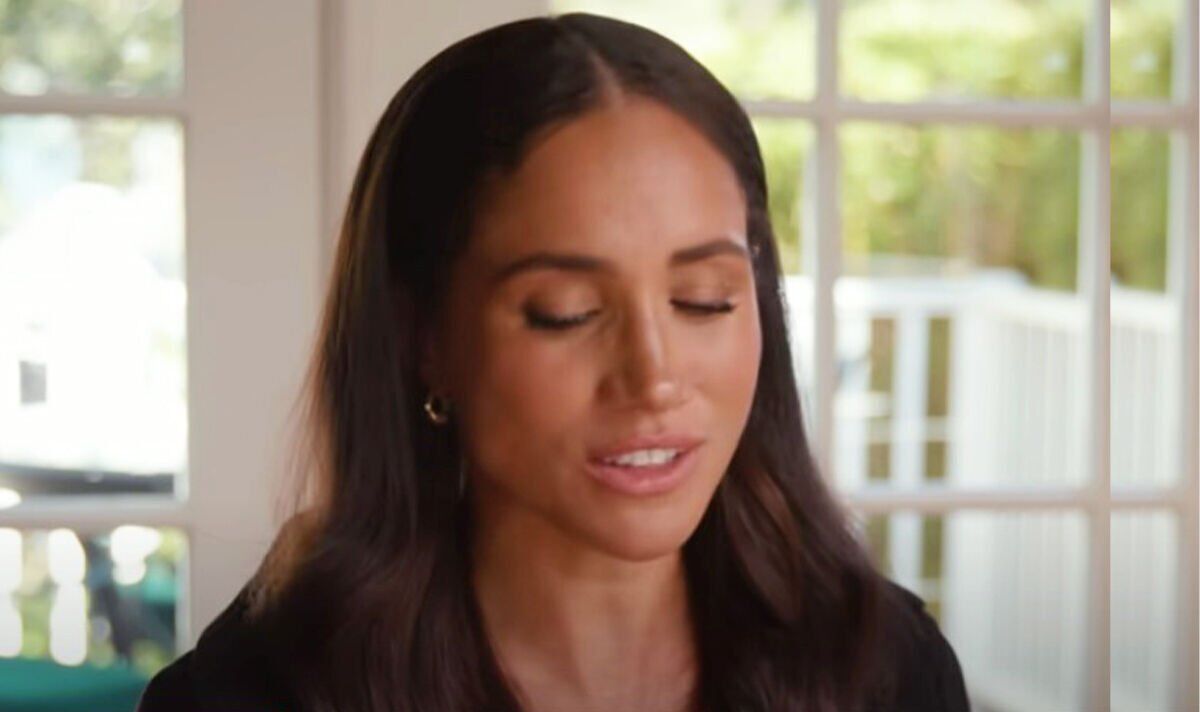 Meghan Markle‘s new video shows the Duchess talking about her hobbies and her children as part of an interview for Variety Magazine. Behavioural expert Darren Stanton, speaking on behalf of Slingo, observed that Meghan looked “comfortable” and “100 percent confident” without her husband Prince Harry, and she “turned on the charm” for the cameras.

Darren claimed Meghan Markle has “grown in confidence” and “comes into her own” during her solo appearances without Prince Harry, such as her latest interview with the American publication.

The expert also noted Meghan looked “powerful” and “extremely comfortable” without her husband. He explained: “During the photoshoot segments, I noticed Meghan putting her hands on her hips. This is a classic power gesture that people in certain positions are taught, such as celebrities, politicians and CEOs.

“The theory is the more space we occupy as a human, the more powerful we will be perceived. Celebrities often adopt this stance in attempts to show their power. Meghan also seemed extremely comfortable posing for photographs.”

Talking about Meghan’s behaviour without Prince Harry, he said: “I believe Meghan comes into her own when she is alone. She appears to have grown in confidence, especially during solo appearances with the media.

“I’m not saying she doesn’t exude confidence with Harry, but she seems more comfortable in her own skin when appearing by herself on screen. She also appeared quite giddy at times. Perhaps she’s just enjoying the opportunity to show herself as an independent woman, as well as being part of a Hollywood power couple.”

However, the expert claimed Meghan was “caught off guard” after being asked about her life with her husband Prince Harry.

Darren said: “I noticed a sudden shift in emotion with Meghan’s body language when she’s asked about what she watches with Harry. She broke her pattern of looking left and right by staring up, which often means she is reflecting back on memories. The fact that she began to blink quite a lot means that the question caught her off guard.

“The previous questions were all based on something she could have prepared for, however this one caused her to change and display leakage signals with the eyes. It doesn’t mean she is lying about her answer, but she has clearly shifted the way in which she answered the question in relation to the emotion it’s evoked.”

The Duchess’ interview showed she is “a natural in front of the cameras,” Darren claimed.

The body expert noted Meghan is “quite tactile and not afraid to show her emotions”. In psychology, “we would refer to Meghan as being very kinaesthetic. This means she is able to respond through gut instinct”.

Darren continued: “She comes over 100 percent confident in herself throughout the interview.

“As Meghan was previously an actress with many professional accolades under her belt, she’s used to being on set and in front of the camera. It’s almost like she is able to turn on the charm for the interviewer.”

Talking about the way she answered the questions, Darren explained: “It is very interesting to see how Meghan processes information. When she is asked a question, she tends to look down and to the left.

“This means she is running a tiny voice in her head called internal auditory dialogue. We all have this little voice when we’re going into certain situations, like a job interview or a social setting.

“That’s her way of processing the question and checking her response. She is able to do this process very fast.”

The Duchess of Sussex also displayed “true emotions of happiness and joy” and “a lot of the smiles”, said the expert, which showed she was being “genuine”.

He explained: “She appears to be operating from true emotions of happiness and joy. When someone is being genuine their whole face is engaged, whereas someone who is looking to mask sadness only engages half of their face.

“We know Meghan’s happiness is authentic as we can see three crows feet at the side of the eyes. Her whole face is engaged and she is radiating positivity.”

The expert added: “Despite being edited into different segments, Meghan gives us a number of interesting clues as to how she processes questions and responds in her interview.

“The first thing with Meghan in this clip is that she has amazing eye contact to whom she is addressing. We talk about genuine eye contact being three to five seconds and she definitely adheres to this perfect timeframe. She’s also not distracted when looking at the interviewer. This is a clever technique to make somebody feel special.”