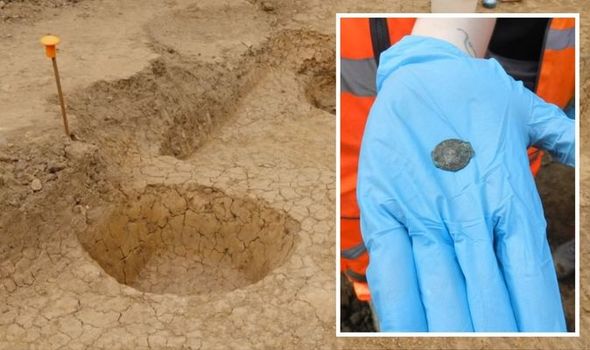 London and Britain’s other big cities boast a wealth of archaeological treasures, but also present archaeologists with lots of challenges. Each generation builds on what went before them, sometimes completely obscuring the previous layers. Such activity means it is particularly rare to find prehistoric remains under the capital city.

On the southern bank of the River Thames in Barn Elms — just over the river from Fulham Football Club — they found exactly that.

London is generally thought of as being originally a Roman city since no substantial pre-Roman settlement has ever been identified close to the city centre.

But archaeologists uncovered the remains of an Iron Age [800BC to AD43] settlement.

Two battle shields and a helmet from the Iron Age were dug up from the river bed in Victorian times, and several other things have been found since.

READ MORE: Archaeologists blown away by ‘once in a lifetime’ Roman discovery

One of the helmets dug up from the river bed in the Victorian era. (Image: BBC)

Jack Russell is the archaeologist for the London Super Sewer project. He told the recent BBC documentary Digging for Britain: “The River Thames has always thrown up a lot of things from that period.

“But no one really knew where the people who were putting those things in there were living.”

Excavations at Barn Elms, which first began in 2019, revealed the first signs of that dwelling — a round house.

The site’s lead archaeologist Mike Curnow told the BBC: “What we’ve really found is quite a lot of post holes, and all of them are really quite chunky post holes.”

Such deep, wide holes would have housed wooden posts capable of holding a massive structure.

The footprints of more round houses were later discovered. Professor Alice Roberts, the documentary’s presenter, revealed further findings offered evidence of a “bustling community with a thriving iron working industry”.

One of the smallest finds on the site provided the biggest news.

Coins found at Barn Elms still had the maker’s tabs that would normally have been removed, meaning an Iron Age mint could have been sited there.

The coins found still had the maker’s tabs that would usually have been removed. (Image: BBC)

The coins’ design, Prof Roberts said, suggest they were made for the Cantiaci Tribe — Iron Age Celtic people living in Britain before the Roman conquest. They lived in the area that is now Kent and used Canterbury as their capital.

They were known to be among the first users of coins in Britain and traded with other Europeans.

Mr Curnow said: “The site expands our understanding of the Iron Age.

“It’s filling in the prehistory of London. Almost rewriting, if you like, this idea that there’s nothing going on in London before the Romans.”

Adam Sutton, an Iron Age specialist from the site, further investigated the coins. He confirmed they were indeed some of the first coins made in Britain.

He said: “There’s a lot of debate as to what the role of coins was in Iron Age society and whether they had a monetised economy.

“But it’s totally possible that the fact that we’ve got manufacturing evidence here means that people had to come and exchange the objects which they wanted to buy for what is effectively money.

“There’s also potentially a ritual aspect. They could potentially be intended for offerings.

“The river is very nearby and we know that people liked to cast metal objects into the river as a ritual.”

Other finds from in and around the round house provide evidence of cooking and iron manufacturing.

An artist’s impression of how the site might have looked provided archaeologists with a revised idea of London’s communities at the time.

Mr Sutton said: “They really give us an impression of life in London before London was there, which I think is really amazing.”

POLL: Would you install a hydrogen-ready boiler in your home?