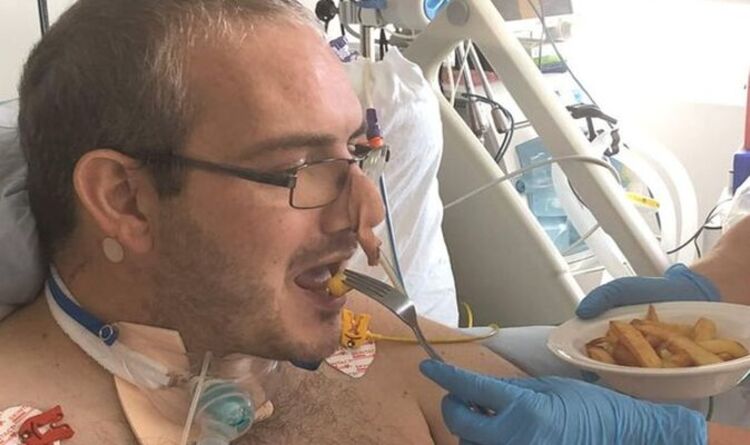 Darren Roberts, 39, had been relaxing in bed when he experienced a sharp pain throughout his neck and shoulder, shortly spreading to a pins and needles sensation in his arms. Within minutes, he quickly felt the rest of his body from the neck down go numb, trapping him in the bath he had run to relieve the pain.

Darren remembered how, in July 2019, his parents “called for an ambulance, and when they arrived they basically had to remove me from the bath as I was basically dead from the neck down”.

He was then taken to Merthyr Tydfil hospital for an MRI scan, before being transferred to the Cardiff’s University Hospital of Wales by ambulance and placed in a medically-induced coma.

He recalled how his family “were told to prepare for the worst” after he contracted an aggressive form of pneumonia.

He told WalesOnline: “Fortunately I did start responding to treatment and I was brought out of an induced coma after four weeks.”

After reawakening, Darren realised the damage to his spinal cord was irreversible, and that his life “was never going to be the same again”.

He added: I didn’t know what to think because I was such an independent person.

“It was a massive shock to my system to now be in a position where I had to ask for everything – even something as little as a sip of water.”

Darren is now what is known as tetraplegic, despite regaining some limited movement in his arms.

READ MORE: Hotel so ‘terrifying’ that woman turns down job because it’s nearby

There is a GoFundMe page active to raise money for specialist equipment for the house.

But Darren described how the ordeal has taken a toll on his mental, as well as physical, health.

He said: “I feel like I’m just a burden to everyone which doesn’t help my depression and anxiety.”

But he praised the efforts of his family and staff caring for him, saying they have always been “very supportive” of him throughout the years, and went above and beyond despite the stresses of the COVID-19 pandemic.