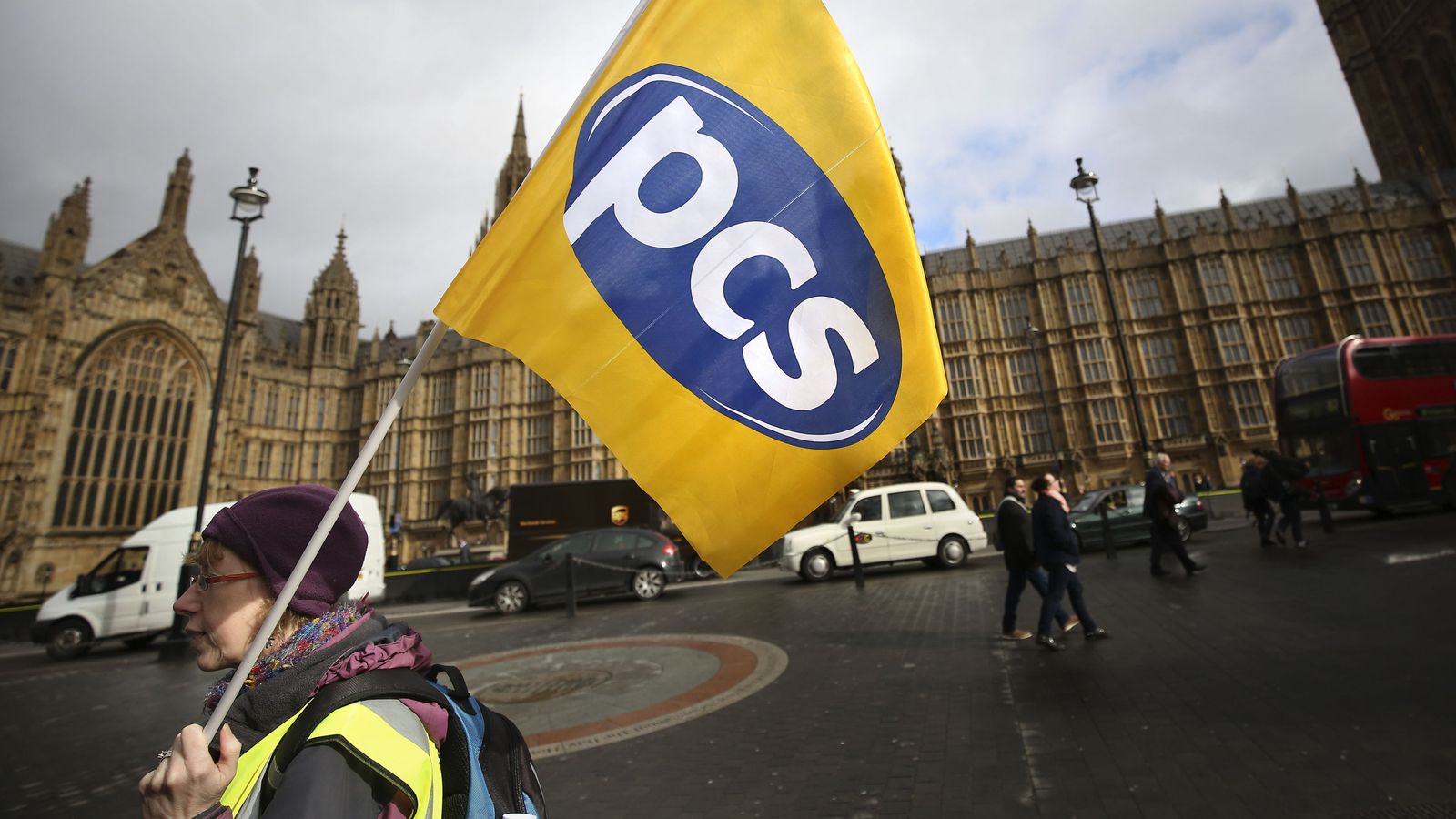 A union representing more than 100,000 civil servants has voted to strike in a dispute over pay, pensions and jobs.

The Public and Commercial Services union (PCS), one of the largest unions in the UK, said the legal threshold for industrial action had been reached in 126 separate areas, covering workers including driving test examiners, border force officials and Jobcentre staff.

The union has warned that unless it receives “substantial proposals” from the government, it will announce a programme of “sustained industrial action” on 18 November.

Not all of those affiliated with the union voted to take industrial action.

The union’s general secretary Mark Serwotka said: “The government must look at the huge vote for strike action across swathes of the civil service and realise it can no longer treat its workers with contempt.

“Our members have spoken and if the government fails to listen to them, we’ll have no option than to launch a prolonged programme of industrial action reaching into every corner of public life.

“Civil servants have willingly and diligently played a vital role in keeping the country running during the pandemic but enough is enough.

“The stress of working in the civil service, under the pressure of the cost of living crisis, job cuts and office closures means they’ve reached the end of their tethers.

“We are calling on the government to respond positively to our members’ demands. They have to give our members a 10% pay rise, job security, pensions justice and protected redundancy terms.”

At the end of September the PCS began a strike ballot of more than 150,000 civil servants.

Members in 214 government departments were urged to vote ‘yes’ for strike action over pay, pensions, jobs and redundancy terms.

When the ballot opened, Mr Serwotka said: “The stress of working in the civil service, under the pressure put on us with job cuts, office closures and the cost-of-living crisis is too much to bear.”

The ballot closed on 7 November.

Read more politics news
Analysis: Five problems PM Rishi Sunak faces on his uphill battle to lead the Tories
‘Quite a lot’ of MPs have downloaded I’m A Celeb app to vote for Hancock to do trials
Ex-top civil servant says Boris Johnson was worst PM he worked under

The PCS votes comes after a nursing union representing hundreds of thousands of nurses voted to hold the first nationwide strike in its 106-year history.

The Royal College of Nursing (RCN) said the strike will affect the majority of NHS employers in the UK as nurses take action against pay levels and patient safety concerns.

The union said that many of the biggest hospitals in England would see strike action but others “narrowly missed” the legal turnout thresholds required for action.

All NHS employers in Northern Ireland and Scotland would be included and all bar one in Wales met the threshold, they added.

The union had urged more than 300,000 of its members to vote for industrial action over pay in the first statutory ballot on industrial action across the UK in the 106-year-history of the Royal College of Nursing.

It had called for its members to receive a pay rise of 5% above the RPI inflation rate, which currently stands at above 12%.

This request has not been met by any UK nation.