A major crisis is coming to a head on pig farms up and down the country.

It’s a crisis that farmers warned us about, and now it’s happening.

Their worst nightmares are coming to pass; the mass culling of healthy animals because there simply aren’t enough butchers to process them and get them off farms. 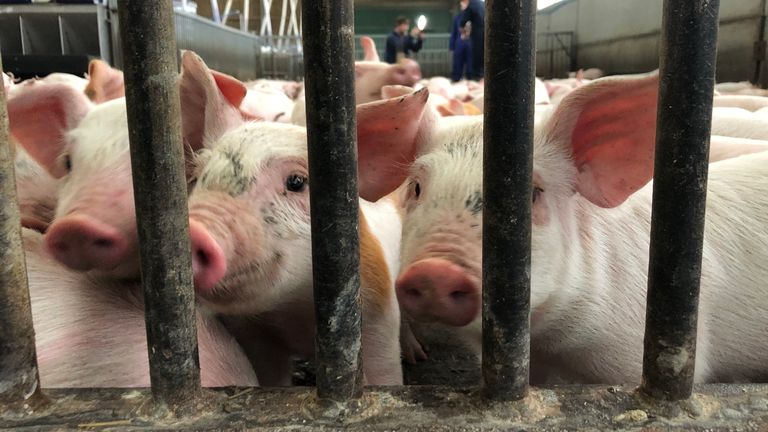 The culling is likely much worse than the numbers being officially reported to the industry body, with fear, shame and sadness preventing many from speaking openly about the reality.

Thousands of healthy pigs are almost certainly being killed every week at the moment – possibly tens of thousands. These animals are not destined for the food chain but are killed just to make space on farms.

Some farmers are even turning to carrying out abortions on pigs; a fractionally less traumatic way to deal with the brutal and traumatic crisis of a backlog of animals.

It all amounts to the largest culling of healthy pigs in the history of British farming. So how did we get here?

The crisis is fundamentally rooted in the current labour shortage.

A combination of changing immigration rules related to Brexit and many workers choosing to go home during the pandemic and not returning, has left the sector 15-20% down on the staff it needs.

Not only has the sector struggled to recruit new workers from the domestic population, but butchers are also highly skilled and can’t be trained up overnight.

It all means that since the early autumn the meat processors have been routinely taking around 25% fewer pigs from farms than agreed in contracts.

Rearing a pig for slaughter is a 10-month process, so this sudden drop off has led to a huge backlog of pigs on farms, likely around 150,000 nationally.

There are other forces that are compounding the problem, including a loss of exports to the Chinese market for some pig processors and disruption caused by the recent CO2 shortage.

It all constitutes a huge challenge for farmers because not only do pigs left on a farm for too long get too big to retain their value, but more urgently, space is swiftly running out.

The UK has strict welfare standards to avoid overcrowding and many farmers simply can’t manage much more of a backup.

Kate Moore runs her family’s East Yorkshire pig farm with her sister and she feels the pressure of these choices acutely.

Across their multiple sites, at any one point she could be caring for as many as 40,000 pigs.

Her farm is run to the highest standards, she uses straw in the kennels which is a more expensive option but much better for the pigs – “our European counterparts think we’re mad,” she says smiling.

You can see her passion and care for the animals in everything she does, you can see too how heavily the current crisis is weighing on her.

“We’re asking a lot of favours from a lot of people,” she explains – they’ve utilised every last bit of space with everyone and anyone who will help them.

She’s also had to compromise on her high standards, usually she wouldn’t mix different age groups of pigs on the same site, but she’s having to do that now to avoid something worse.

If nothing changes by Christmas she’ll be left with no choice but to cull, a reality she describes as “disgusting”.

“I feel angry, I feel upset, I’ve cried, I’ve got cross. Yeah, I’ve had every feeling that you can imagine,” she says.

“Just the thought that we’ve had to apply for a licence to be able to kill healthy animals actually makes me feel a bit sick. If I get to a position where we have to do it, we will need so much support because it will totally break my sister and I. It’s criminal. Totally criminal.”

The backlog is costing her dearly too, she’s currently losing between £20- £30 per pig, many other farmers she knows have already gone under.

“It’s just not fair because none of this is our fault and we’re the ones that are dealing with it emotionally, financially. Yeah, it’s all we think about at the moment.”

The pressure and stress felt by farmers is echoed by vets too.

People whose vocation is to care for animals faced with the grim reality of consulting on killing them.

Duncan Berkshire has 17 years’ experience as a pig specialist vet and says what’s happening at the moment is worse than anything he’s ever seen.

His face visibly falls when asked about the reality of performing abortions on pigs.

“One of the options, rather than having to kill pigs when they are alive at this point,” he says gesturing at four-week-old piglets, “is the unfortunate discussion about whether we abort sows that are already in pigs.”

It’s no more or less humane, he explains, but sometimes easier on the mental health of the farmer than culling live piglets.

But either way it’s clear he’s disgusted by this reality.

“It’s soul-destroying. Absolutely soul-destroying . It’s certainly not what I came into the veterinary profession for, to discuss how we were going to kill perfectly healthy animals

“Here we are at the point of food poverty, there are people starving around the world, and yet we have animals that have been killed, stuck in a skip or burnt. Unforgivable, unforgivable.”

He fears too that things will get worse before they get better, a number of his clients have already had to cull and a number more are just a few weeks away from having to do so.

These are conversations he says he is now having to have “on a daily basis”.

It’s difficult to know exactly how many pigs have been culled so far because there is no central reporting mechanism, but it’s likely thousands are currently being killed a week at the moment, possibly tens of thousands.

At least 16,000 have already been wasted according to the National Pig Association (NPA). But these are the numbers based on self reporting to the industry body and therefore are likely to be a gross underestimate.

According to survey data shared by the NPA exclusively with Sky News, 11% of pig farmers have already had to cull animals, with a further 10% saying they are less than two weeks away from doing so.

Of those that have already been culled, most of the animals killed were piglets or weaners.

Another potential way to try and assess how many pigs are being killed is to look at the work being done by rendering firms. These companies take animal by-products such as oil or fat.

Usually these firms take the remains of butchered pigs and the odd animal from farms that have died of natural causes.

In recent weeks however some have said they have been taking in up to 250 tonnes a week.

While not all this tonnage is guaranteed to be culled animals, it gives some insight into the fact significant culling is happening.

Following concerted campaigning from the industry, last month the government introduced three measures to try and alleviate the problem.

Firstly it announced it would introduce 800 temporary visas for foreign pork butchers to come into the country for 6 months.

The other two measures were especially designed to get pigs off farms quickly and immediately while the new visas were being granted and allocated.

A slaughter incentive payment was introduced to try and persuade abattoirs and meat processors to schedule extra kills, and the government is now funding private freezer storage – the idea being that pigs could be stored there temporarily before being butchered.

However neither measure has yet alleviated the problem.

“There’s been a lot of issues in terms of trying to find the right people to come into the country on a temporary basis,” explains Zoe Davies, CEO of the NPA.

They expect that these new butchers won’t be fully on stream until the new year.

And then there are problems, she says, with the slaughter bonus and the extra freezer storage.

The bonus only applies to meat that is going into private storage or is being exported abroad and given that the meat processing industry is currently rushing to prepare domestic Christmas orders, there is little incentive for them to take-up these facilities.

The slaughter rate is now up, but the NPA understands none of the extra freezer storage has yet been used.

Some pig farmers are very angry about this, and accuse the meat processors of not playing their part.

Many say they aren’t receiving proper forecasts for the months ahead making it impossible to plan and there’s frustration that many of the processors are still reporting significant profits while pig farmers have been struggling to stay afloat.

The British Meat Processors Association says the staffing shortages they face are still chronic and “the combination of COVID-19, dealing with the lack of labour supplies and the logistical challenges due to the transport issues has made running a meat processing plant incredibly challenging throughout the year and especially now in the run up to Christmas.”

This crisis is likely to take a long time to resolve.

Some say that even if the processors began taking full orders again tomorrow, the backlog would take a year to 18 months to work its way through.

It’s crippling farmers, and many have gone out of business already.

Those who are hanging on are only just.

The first six months of 2021 saw the pig industry record its worst financial performance on record, and in total farmers have already lost an estimated £160m.

Farmers are routinely having to feed more pigs for longer, selling fewer than contracted and getting less for the larger animals. The skyrocketing of feed prices and a fall in the pig price are all compounding the problem.

A spokesperson for the Department for Environment Farming and Rural Affairs said “We continue to work closely with the pig industry to help them respond to challenges caused by the pandemic, including the loss of exports to the Chinese market for certain pig processors and global disruption to CO2 supplies, all of which have contributed to a backlog of pigs.”

There is a chance that shortages of some pork products will be seen on the shelves next year once the impact of farmers starting to thin down their numbers works through the system.

But it is the mental health impact on farmers that will perhaps last longest and it’s something that Duncan Berkshire is very worried about.

“It can already be quite an isolating life,” he explains.

What’s happening amounts to farmers’ worst nightmares, and it’s totally out of their control.

“And it’s happening because of human error,” he says sighing. “It’s unforgivable.”