Online electricals retailer AO World has warned of poor availability of some products and slashed its sales outlook due to supply chain problems.

Products such as gaming consoles and mobile phones – which are newer territory for AO than its traditional staples such as washing machines and fridge-freezers – were more likely to be affected.

Shares plunged 28% as the group said its peaking trading period ahead of Christmas now looked “significantly softer” than it had previously appeared and cut its annual sales and profit outlook.

It had previously flagged the impact of UK HGV driver shortages as well as global logistics issues at the start of October.

AO’s warning is the latest sign of supply chain strains affecting the availability of products to customers – with Sainsbury’s recently acknowledging a hit to consumer electronics sold by its Argos brand.

Meanwhile elsewhere in the economy, Primark and Next have revealed the effect on some of their clothing lines and customers at some Greggs stores have at times found it hard to get hold of vegan sausage rolls.

The latest warning came as AO, whose sales have been lifted by the big shift online during the pandemic, reported a 6% rise in revenues to £760m for the six months to 30 September – while the number was 67% higher than two years ago.

But it made a £10m pre-tax loss for the latest half-year period, after notching up an £18m profit a year ago.

AO said that, when stripping out the impact of price hikes, sales had been falling in recent weeks compared with last year. 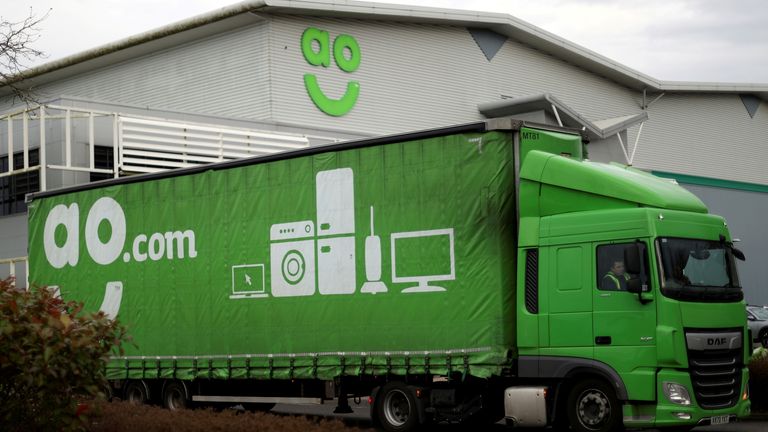 He said: “My personal view is that’s not the end of the road – I believe there will be more to come. We’re operating in a volatile and uncertain world.”

AO said: “We continue to see meaningful supply chain challenges with poor availability in certain categories, particularly in our newer products where we have less scale, experience and leverage.

“As a result of these factors, the all-important current peak trading period is significantly softer than we anticipated only eight weeks ago.”

It now expects to see annual sales at best unchanged from the previous year and at worst 5% lower, while it downgraded its underlying profit outlook to £10-20m, from a previous range of £35-50m.

AO said that it had recruited about 500 new drivers to meet demand for its busy period and “easing the previously reported shortage of drivers”.

Meanwhile it has faced tough competition in its German market, where sales fell in the first half.

AO founder and chief executive John Roberts said: “Our results over this period have inevitably been affected by the constraints and uncertainty seen across our industry.

“We’ve materially cemented the progress of last year, with a step change in scale and consumer behaviour – and the fundamentals of the business are in place for sustained growth.”

Richard Hunter, head of markets at Interactive Investor, said: “The company is currently in a parlous position.

“The well-publicised supply chain disruptions have had a severe impact, with a shortage of delivery drivers a particular issue.

“At the same time, the group’s foray into the German market is not only in the early stages of establishing the brand, but is also being faced by significantly increased competition.”