Lidl has announced its latest expansion plans which will see it aim to reach 1,100 stores in Britain by the end of 2025.

The German-owned discount supermarket said the new target, which builds on a previous goal to reach 1,000 sites by the end of 2023, would result in the creation of 4,000 jobs.

The retailer currently has more than 880 stores plus 13 distribution centres in Britain, employing more than 26,000 people.

It recently revealed an increase in wages which it said would make it the highest paying supermarket in the country from March 2022.

The expansion announcement came as Lidl GB published results for the year to 28 February showing that sales rose 12% to £7.7bn while pre-tax profits swung to £9.8m after a loss of £25.2m a year earlier.

It opened 55 stores during the period.

The company was boosted by additional sales during the pandemic when as an essential retailer it was allowed to stay open – and said this largely offset extra costs such as for PPE, extra cleaning, and taking on more workers for security measures and the shop floor.

Lidl said: “The pandemic has had a large influence on consumer behaviour patterns in the industry and the company has responded well to this challenge.” 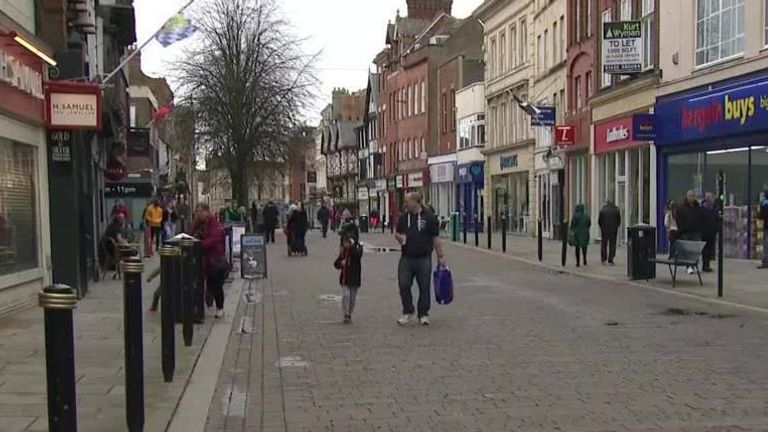 :: Listen and subscribe to The Ian King Business Podcast here.

The company paid back more than £100m of business rates relief it received from the government during lockdowns.

It also acknowledged challenges for imports and exports created by extra red tape following the end of the Brexit transition period in December 2020.

These included “additional costs on an item-by-item/shipment-by-shipment basis due to customs duties and import costs”.

Lidl GB chief executive Christian Härtnagel said: “We delivered an impressive trading performance in the period which was supported by our continued investment in new and existing stores, product innovation and our people.

“Looking ahead, we remain confident in our strategy, our stores-first approach and we remain steadfast in our commitment to provide our customers with the best quality products at the lowest prices.

“We continue to see tremendous opportunity in the market and that is why today we are announcing our new target of 1,100 stores by the end of 2025.”