At last November’s Glasgow climate talks COP26, many analysts predicted the cost of electric vehicles were set to plummet in the next few years.

Then in December, the government cut down the grant for buyers of electric vehicles.

So will they still soon be much cheaper? In short, yes. Here’s why. 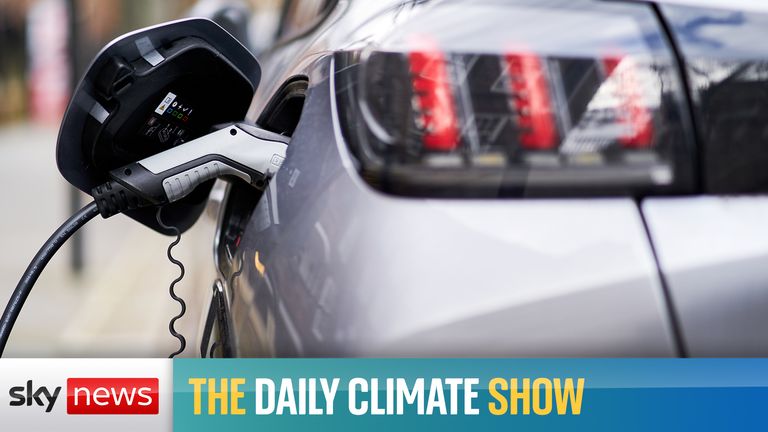 Electric cars are becoming much cheaper to make

Battery electric vehicle (EV) prices have already fallen dramatically and are expected to reach parity with petrol or diesel cars between 2025 and 2027 – and be cheaper very soon after.

The average motorist should save £700 a year in fuel costs by switching, according to New Automotive, a research group aiming to accelerate the shift to electric.

The price drop is partly due to advancements in the batteries, set to tumble further still, as well as carmakers producing more mass market cars.

“International agreements on climate change mean car companies understand that there is a global transition to clean transport under way,” said Ben Nelmes from New Automotive.

“They are racing to increase the number of electric models they are selling to secure a share of tomorrow’s car market,” he said.

Now that the auto industry is designing EVs from scratch – rather than adapting existing design structures known as “platforms” – they are improving both performance and cost.

Subscribe to ClimateCast on Spotify, Apple Podcasts, or Spreaker.

For now, the car industry is calling for increased incentives for buyers until EV prices match those of combustion engine cars.

Second-hand EVs are about to hit the market

In 2019 many electric cars were bought up by commercial fleets – taxi or car hire companies or those with company cars – after the government offered tax breaks for EVs.

These companies tend to sell off those vehicles after two to three years, so those are about to enter the second-hand market.

The UK plans to ban the sale of new petrol and diesel cars from 2030.

Are there enough charge points?

Around two-thirds of people in the UK have driveways, allowing them to charge an EV at home.

But it is “vital that local authorities play an active role in ensuring that chargers are rolled out in residential areas where houses do not have driveways, to enable equal access to the benefits of owning an EV,” said Mr Nelmes.

Charging on long-distance journeys can still pose a challenge. The car industry is calling for government investment in infrastructure, meanwhile Shell has promised to install 50,000 charge points by 2050.

Car ranges have increased to around 300 miles for the newest models and new apps can tell you where charge points are, how much they cost and if someone is using it.

What about the rare minerals they need?

Batteries require minerals such as lithium and cobalt.

“There are sufficient quantities of all the raw materials needed for a rapid expansion in electric cars with proven global reserves much more than cumulative future demand,” said Greg Archer from Transport and Environment.

The majority of the world’s lithium does not come from mining, but is made from brine using electrolysis.

Cobalt suffers from many of the same environmental and social issues as the fossil fuel extraction that it is effectively replacing.

Questions over the supply of those minerals were raised when Sky News revealed the UK was falling dangerously behind in its battery industry and needed to boost mineral production by 90 times to keep up.

But plans are afoot for a new large scale battery factory in Blyth, as the UK – as well as the US and Europe – attempts to catch up with China, Japan and South Korea in manufacturing.

Can electric vehicle batteries be recycled?

Batteries can be recycled, ensuring the metals are reused, unlike the petroleum burned in engines.

“Whilst electric cars are not environmentally benign, their environmental impacts are significantly less than the cars with engines they replace,” said Mr Archer.

He said introducing targets for battery producers to use more recycled materials would reduce their environmental impact overall.

Mike Hawes, chief executive of Society of Motor Manufacturers and Traders (SMMT), said manufacturers are legally required to take back propulsion batteries, primarily for recycling, which can provide a supply of raw material.

Will the energy crisis make EVs more expensive to charge?

Although electricity prices have been affected by the gas crisis, people will still reduce their fuel costs by switching to an EV, as electricity is much cheaper than petrol, explained Mr Nelmes.

The show investigates how global warming is changing our landscape and highlights solutions to the crisis.