Boris Johnson today warned world leaders their promises on tackling climate change are starting to ‘sound hollow’ as he read them the riot act ahead of the COP26 summit in Glasgow.

The Prime Minister said there are ‘no compelling excuses for our procrastination’ on reducing harmful emissions and action already taken amounts to ‘drops in a rapidly warming ocean’.

Speaking at the G20 summit in Rome, he said that only 12 of the club’s members have committed to reaching a target of net zero emissions by 2050 or earlier.

Dramatically raising the stakes, he said that if the gathering in Glasgow fails to secure a major breakthrough ‘then the whole thing fails’.

Mr Johnson said world leaders must now flesh out the 2015 Paris Agreement on climate change, warning that failing to do so will leave ‘the world’s only viable mechanism for dealing with climate change… holed beneath the water line’.

The premier escalated his rhetoric amid fears the summit in Glasgow, which formally got underway today, will be a flop after the G20 watered down its Net Zero ambition to ‘by or around mid-century’.

The PM has been trying to use the Rome summit of powerful nations including China and Russia to build momentum ahead of COP26.

But although the communique from the G20 backed urgent action, it gave more wriggle-room for emissions to continue, with an original goal of ‘2050’ replaced by looser language.

Mr Johnson has already admitted that he was stonewalled by China’s Xi Jinping in a call when he suggested the giant economy should aim for carbon output to peak by 2025 instead of 2030.

Meanwhile, the start of COP26 has been disrupted by storms in the UK that have blocked train services north from London – leaving thousands of delegates unable to make it to Glasgow.

In interviews this morning, COP26 president Alok Sharma dampened hopes of a significant breakthrough at the summit by saying it is going to be ‘really, really tough’ for world leaders to strike a deal.

Mr Sharma said there are now two weeks to get an agreement ‘over the line’ as thousands of delegates from across the globe arrive in Glasgow for the gathering. 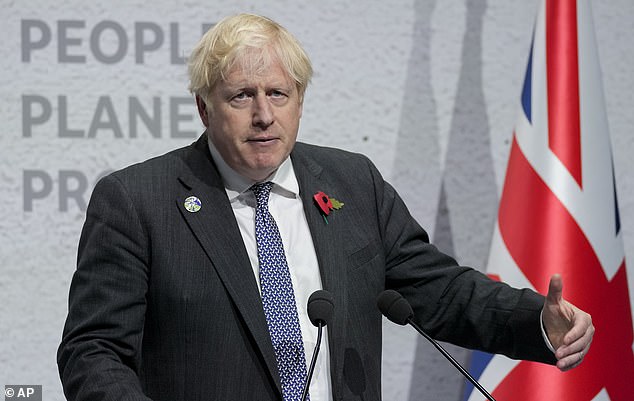 The UN summit is aiming to persuade countries to agree action to restrict global warming to no more than 1.5 degrees – something the G20 is likely to support.

Mr Sharma urged world leaders to ‘leave the ghosts of the past’ behind them as he said ‘they have to deliver’ on the promises they have made to cut harmful emissions.

Russian President Vladimir Putin and President Xi are both snubbing the COP26 summit by not attending in person – although they will contribute virtually.

It came as Jose Manuel Barroso, the former European Commission president, expressed concerns over the level of international cooperation on tackling climate change.

Mr Barroso said it ‘makes sense’ for all of the world’s major players to work together for ‘global public goods’.

But comparing the current situation to that of the 2008 financial crash, he said: ‘I can tell you from experience that today’s atmosphere, the political understanding and level of cooperation, is clearly below what was before when we saw the financial crisis.’ 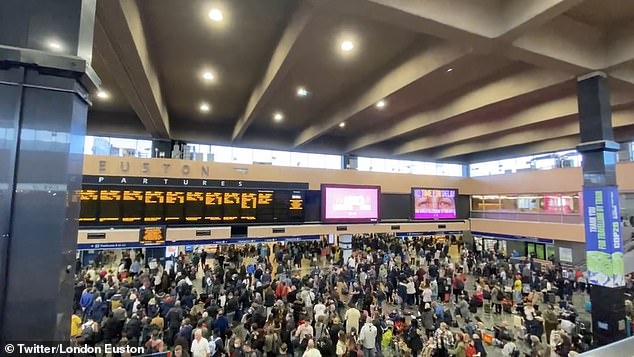 Delegates, campaigners and journalists travelling by train to the Glasgow climate conference fell victim to a weather chaos today after a fallen tree on a railway line. Pictured: London Euston is exit only due to overcrowding and suspended services 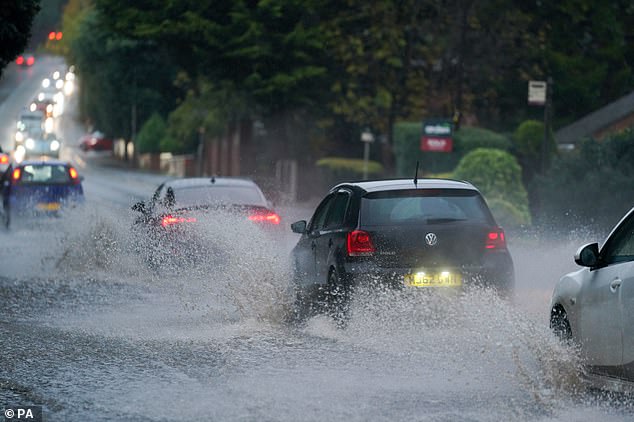 Pictured: Vehicles travel through standing water during heavy rain in Bromsgrove, in the West Midlands, this morning

Delegates, campaigners and journalists travelling by train to the Glasgow climate conference fell victim to a weather-related chaos today after a fallen tree on a railway line.

All tracks on the main rail route between London and Glasgow were blocked near the town of Milton Keynes due to the tree which fell into overhead electric power lines as the UK was hit by brutal 80mph winds and torrential rain.

A Reuters reporter on a cancelled train service said several passengers had changed their travel plans and were booking flights to Glasgow where the United Nations COP26 climate conference kicks off on Sunday.

Sharing a video from the scene, Network Rail has said that Euston train station is exit only due to the fact that no trains were running from the station. They added that all passengers are being advised to avoid travelling due to lines being closed.

Wind damage has been reported in multiple areas of the UK on Sunday with the Met Office unable to rule out whether any tornadoes have taken place.

Yellow warnings for wind and rain are in place over large parts of the west and elsewhere, and more are likely.

Leaders at the G20 agreed on carbon neutrality ‘by or around mid-century’ as the conference came to a close just ahead of COP.

But they set no target for phasing out domestic coal.

According to the final communique from the summit, the G20 reaffirmed past commitments by rich countries to provide 100 billion US dollars annually to help poorer countries cope with climate change.

Leaders agreed to ‘put an end to the provision of international public finance for new unabated coal power generation abroad by the end of 2021’.

G20 leaders said they will ‘accelerate our actions across mitigation, adaptation and finance, acknowledging the key relevance of achieving global net zero greenhouse gas emissions or carbon neutrality by or around mid-century’.

Downing Street said COP26 will be one of the biggest events the UK has ever hosted, with 25,000 delegates expected from 196 countries and the European Union.

Ministers, climate negotiators, civil society and business leaders are set to take part in talks and debates over the course of the two-week conference.

Boris Johnson said last week it will be ‘touch and go’ if the gathering will be a success having previously been bullish on the chances of a breakthrough.

Last night the Prime Minister said the summit will be the ‘world’s moment of truth’.

Told that countries have failed to deliver on the climate change commitments they made in the landmark 2015 Paris Agreement, Mr Sharma said: ‘Well, you are right, this is on world leaders at the end of the day and they made the commitments in Paris that we would limit temperature rises to well below two degrees, pursuing efforts to 1.5 and now in Glasgow they have to deliver.

Told that Mr Johnson appeared to have changed his tone on the likelihood of success at the summit, Mr Sharma said: ‘The Prime Minister is absolutely right, it is going to be really, really tough at this summit.

‘We have got two weeks to get this over the line. But he was also making the point that when we took on the presidency of COP26 less than 30 per cent of the global economy was covered by a net zero target.

‘We are now at over 80 per cent, almost all the G20 nations that we are talking about have got a net zero target for the middle of the century.’

Asked directly if a deal will be done at the summit, Mr Sharma was non-committal in his response.

He told Sky News: ‘That is what I am driving towards and I think what I have always said is that what we need to come from out of Glasgow is to be able to say with credibility that we have kept 1.5 alive.’

Mr Sharma was then asked three times during an interview on the BBC’s Andrew Marr Show if a deal will be done in Glasgow.

He replied: ‘As you said in your introduction, my job is effectively to act as shepherd in chief. This is on leaders.

‘It was leaders who made the commitment in Paris. It is leaders of the biggest economies meeting now at the G20 and they need to come forward and collectively we need to agree how we are going to address this gap.’

Mr Sharma said he expected COP26 to be ‘in many ways tougher than Paris’ because the 2015 pact was a ‘framework agreement’ and ‘some of the most difficult rules are still outstanding after six years’.

‘That makes it really challenging and, of course, we know that the geopolitics is more difficult than it was at the time of Paris,’ he said.

COP26 suffered a blow last week after President Putin and President Xi confirmed they are not attending in person.

China has faced criticism over its climate plans in recent days after Beijing restated its old aims on emissions without setting out any new ambitions.

Asked if China and Russia need to do more, Mr Sharma said: ‘I want more out of every country but I think the point here is that we have made progress and then we are going to have to take stock about where there is a gap in what the commitments are and where we need to be.’

Mr Johnson will arrive in Glasgow this evening following a trip to Rome, Italy, to attend a meeting of the G20.

He expressed concerns last week that the climate change summit could ‘go wrong’ and end in failure.

He said: ‘We need as many people as possible to agree go to net zero so that they are not producing too much carbon dioxide by the middle of the century.

‘Now, I think it can be done. It’s going to be very, very tough, this summit.

‘And I’m very worried, because it might go wrong and we might not get the agreements that we need. It’s touch and go.’

World leaders are due to meet in the city to try to hammer out a deal to reduce harmful emissions and limit global warming to 1.5 degrees

He said: ‘Cop26 will be the world’s moment of truth. The question everyone is asking is whether we seize this moment or let it slip away.

‘I hope world leaders will hear them and come to Glasgow ready to answer them with decisive action.

‘Together, we can mark the beginning of the end of climate change – and end the uncertainty once and for all.’

It was claimed earlier this month that Mr Sharma was angry at Mr Johnson for building up expectations ahead of the summit amid Cabinet fears it will be a ‘damp squib’.

Mr Sharma was said to be ‘raging’ at the PM for ‘ramping up’ hopes of a breakthrough in Glasgow.

Some ministers believe the Government’s messaging ahead of the summit has been too bullish and is ‘completely out of control’. Allies of Mr Sharma denied that he was angry with the PM.