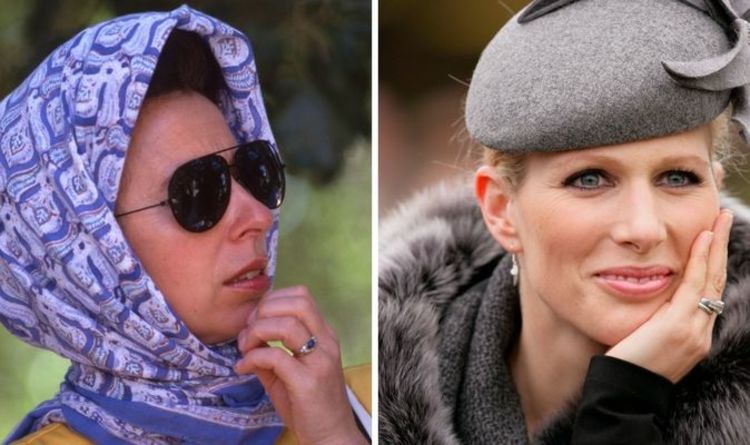 Princess Anne was married to Mark Phillips from 1973-1992, and has been married to now husband Sir Timothy Lawrence since 1992. Zara Tindall was wed to Mike Tindall in 2011. The creative director of Steven Stone, experts in diamonds since 1937, spoke exclusively to Express.co.uk, drawing comparisons between the pair’s engagement rings.

Creative Director Maxwell Stone stated: “It’s interesting that Princess Anne received sapphire engagement rings rather than traditional diamond rings, as it suggests she feels a connection to this precious gemstone.”

She “famously” had a blue sapphire ring, which reportedly cost Prince Charles £47,000.

Featuring a 12 carat Ceylon sapphire originating from Sri Lanka, it’s no wonder that the ring is now worth an eye-watering £390,000 in the modern day, according to Steven Stone.

They stated: “The sapphire is a deep, royal blue, of AAAA quality, making it amongst the most valuable of its kind.”

This ring is now in the hands of Kate Middleton, who is not the only royal who is fond of sapphires, as “the queen is frequently seen sporting the gemstone on her famous brooches”.

So Princess Anne’s blue sapphire ring has a lot in common with her former sister-in-law the late Diana, and her mother Queen Elizabeth II, but what about her daughter Zara?

Maxwell Stone stated: “When Mike Tindall proposed to Zara he chose a four-claw split shoulder design with several pavé set diamonds, complete with a single solitaire diamond in the centre.

“It’s thought that was thought to deliberately have a low profile setting, allowing Zara to wear her engagement ring while competing in equestrian events.”

Zara has since supplanted her mother as the prime equestrian in the Royal Family, but Princess Anne too was a marvellous horse rider.

The Princess Royal even competed in the 1976 Olympics, and was the first Royal Family member to do so.

Zara Tindall’s engagement ring “combines a traditional style with a twist of modern design,” according to Maxwell Stone.

“The classic round diamond looks to be around one and a half centimetres, giving the ring an estimated value of around £15,000. However, considering it’s worn by the granddaughter of the Queen, it comes with a legacy which makes it priceless.”

Princess Anne and Zara Tindall are alike in many ways; both are world class equestrians, and both enjoy staying lowkey as opposed to living a life in the spotlight.

But what about their engagement rings?

Maxwell Stone suggested that the modest size of the stones reflect their lifestyle.

He stated: “While these two rings both have different designs and feature different stones, they do have one thing in common. Both of the rings are notably understated in comparison to many other famous engagement rings, allowing the royals to wear them on a day to day basis.