In a rare move, UFC pulled Kiselev from the event after he came under scrutiny for refusing to stop the welterweight bout.

Saint-Denis, a newcomer to the promotion, was clearly out of his depth and suffered a brutal beatdown at the hands of Dos Santos.

Dos Santos hit Saint-Denis with several right hands before landing a long series of unanswered punches and knees. The Brazilian recorded 149 significant strikes to 67, including 96 major blows on Saint-Denis’ head. 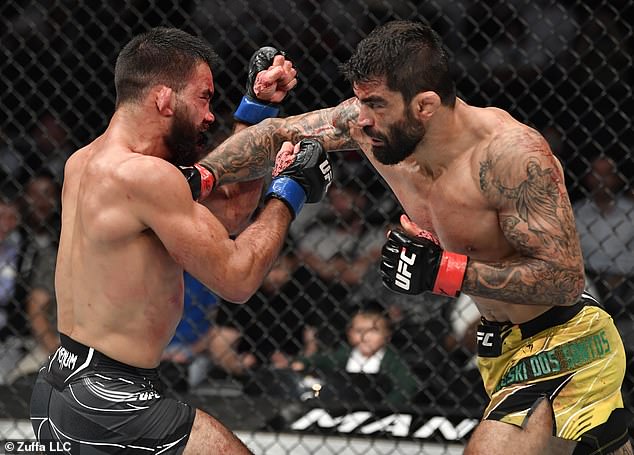 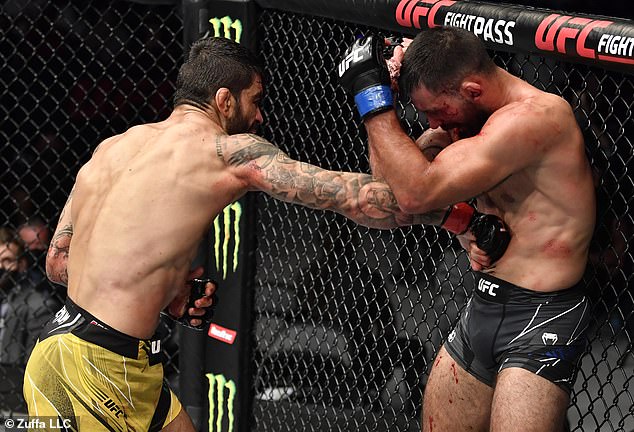 The newcomer exhibited resilience but, at one point, retreated to the fence and did nothing but cover up, prompting calls from UFC commentators and even fans in attendance to stop the fight in the second round.

But the referee refused to intervene and Saint-Denis managed to keep fighting and made it to the end of the bout.

Dos Santos comfortably won the fight 29-26 on all three judges’ scorecards but many were shocked that Kiselev had allowed the fight to go that far. 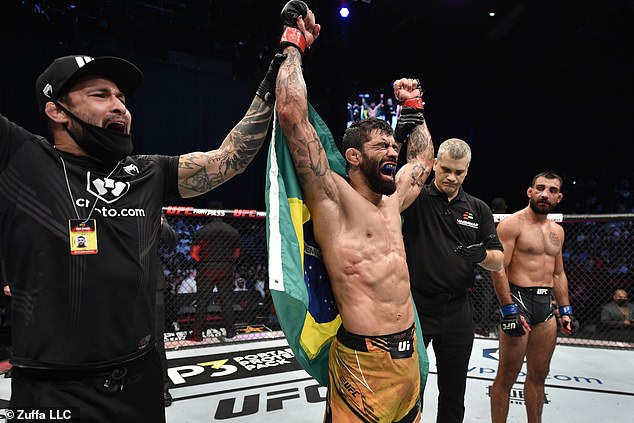 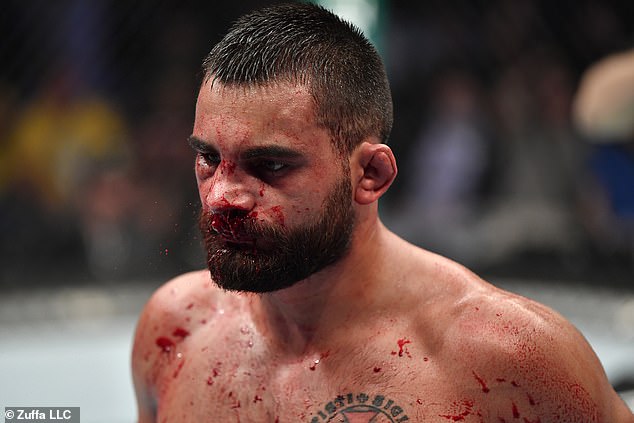 Kiselev was scheduled to oversee a light heavyweight bout between Volkan Oezdemir and Magomed Ankalaev later in the evening but the former light heavyweight fighter was removed and replaced by veteran referee Marc Goddard.

Commentators Daniel Cormier and Paul Felder at one point were heard shouting on the broadcast for the fight to be stopped.

‘Stop the fight,’ they yelled.

‘I don’t know what he needs to see… this is crazy,’ Cormier added.

‘Honestly the worst performance I have seen from a referee in my life,’ he wrote.

‘Honestly a hard job but man unreal. Makes you respect the good ones like Jason Herzog, John McCarthy Herb Dean and many more.

‘I hated watching that I hope Benoit is heading to hospital right now.’

Dos Santos himself admitted that the fight should have been stopped, saying he felt sorry for the Frenchman as the referee’s incompetence resulted in more injuries than he should have had.

‘It was pretty clear that the referee should have stopped it,’ the Brazilian welterweight said, via Fox Sports.

‘He ended up making the fight a lot tougher than it should have been.

‘I feel sorry for the guy because he ended up getting injured way more than he should have – and for myself as well, because when you’re beating someone up, you’re getting hurt yourself as well. 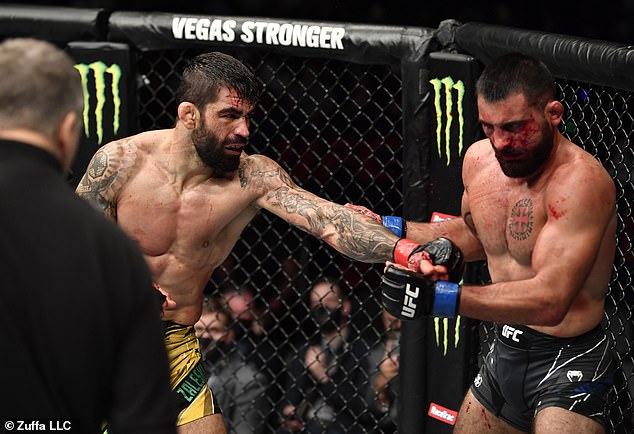 ‘We didn’t know that he had been removed but we did talk about it with the doctors and medical staff – that he didn’t do his job, he was putting people in danger.’

On Twitter, fighters, officials and fans all questioned Kiselev’s competency, including veteran referee John McCarthy who slammed the referee’s job as ‘the worst job of officiating at an UFC event ever’, before pleading with UFC to never let him oversee another fight again.

Michael Chiesa agreed Kiselev was doing an awful job as he wrote: ‘The most important role of an MMA referee is to protect the fighters. This referee is doing a terrible job of that, in more ways than one.’

Meanwhile, welterweight professional Randy Brown not only slammed the referee but also the negative stigma around conceding in UFC.

‘Besides this this ref being trash as hell,’ he posted. ‘When are we going to have the conversation about the negative stigma MMA has about throwing in the towel?

‘I say live to fight another day. This man’s coaches don’t care for his life.’

Former Shooto Middleweight Champion Siyar Bahadurzada slammed Kiselev as a ‘danger to athletes’ and called for the referee to be banned from officiating again.

Others took to Twitter to express their anger and disbelief at the referee.

Alijamain Sterling questioned what the referee needed to see in order to call the fight off.

Meanwhile Kenny Florian took a dig at Kiselev, claiming the best referees give you nothing to talk about.