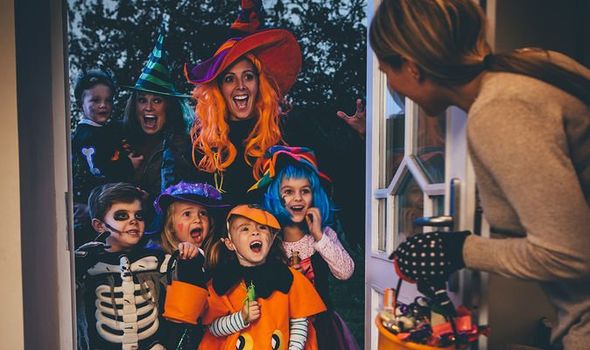 We’re familiar with the modern symbols of Halloween: pumpkins, toffee apples, ghost stories, plastic spiders, skeleton costumes and vampire masks. And this year, events will take on an extra significance, given traditions such as trick or treating and costume parties were almost impossible last year.

But in researching my latest book, I found numerous real-world examples of similar festivals and carnivals around the world – not all related to October 31 – that explore, in some way, the macabre side of life.

Let’s face it, some people love the spooky season (my team), others loathe it (my wife’s team). Bonfires, apple bobbing, horror movies, jack-o-lanterns and haunted house tales – I can see why it’s not for everyone.

My wife cites the commerciality, and the fact that it seemed to arrive suddenly from across the Atlantic. But, while the Americans certainly took the idea and ran with it, the main themes of the festival echo in various ways in all corners of the globe.

Many historians believe modern-day Halloween originated from ancient Celtic harvest festivals, specifically the Gaelic festival Samhain. It’s possible Samhain was Christianised as All Hallow’s Eve – a time to honour all the saints, both known and unknown.

And then, via 19th century migration to the United States from Europe, early traditions were exported and built upon. In the Museum of Country Life in County Mayo, Ireland, there exists a plaster cast of a traditional ghost turnip lantern from the late 1800s. It makes any modern carved pumpkin look positively tame.

The Hungarian Buso festivities involve truly horrifying costumes and parades to mark the end of winter.The Busojaras tradition takes place in the town of Mohacs, close to the Croatian border. It ends on Shrove Tuesday and involves folk music and parades.

According to one legend, the festival’s origins date from the Ottoman occupation. Locals fled to nearby swamps, and, on one stormy night, an old Sokac man advised them to sport terrifying masks to frighten invaders away. Others interpret Busojaras as a means to frighten away winter itself.

Meanwhile, in Piornal, Spain, a single local dresses up each year as the devil for the Jarramplas festival. He is then unceremoniously pelted with up to 15,000 turnips.

The village, located to the west of Madrid, perches at a height of 3,855ft above sea level. Snowploughs are used each year to transport the nabos, or turnips. A brave (some might say, stupid) individual volunteers to dress as Jarramplas (a devilish creature) in multi-coloured armour and, once again, horns.

It is thought by some that the turnip-pelting dates back to an ancient method of dealing with livestock thieves. If, by chance, you were born in Piornal, feel free to volunteer to be pelted. But be warned, there’s a waiting list until 2046.

The KakaMotobi festival in Ghana involves masquerade, brass band d music, and more than a few nightmarish costumes. Held between Christmas and January 1, the people of Winneba have celebrated it in some form for over 100 years.

Originating with Dutch and British traders, the celebration now has multiple distinct groups; there is a group father and mother, a fancy dress leader, numerous cowboys reporting to the fancy dress leader, as well as stilt walkers and scouts. Children wear elaborate puffy costumes and, in stark contrast, fearsome masks. The resulting masquerade is a spectacle like no other.

Suddenly a parade of hideous creatures appear like extras from the Lord of the Rings. Grotesque figures with horns (again) and forked tongues wander around “terrifying” the children who line the streets.

Krampus is the dark side of Saint Nicholas in some ways.Whereas St Nick leaves gifts in stockings for good children, Krampus, as the legend goes, scares naughty children with birch sticks and threatens to carry them off in the basket on his back. In reality, the worst thing modern Krampus doles out to children is a friendly high five or a fist bump. 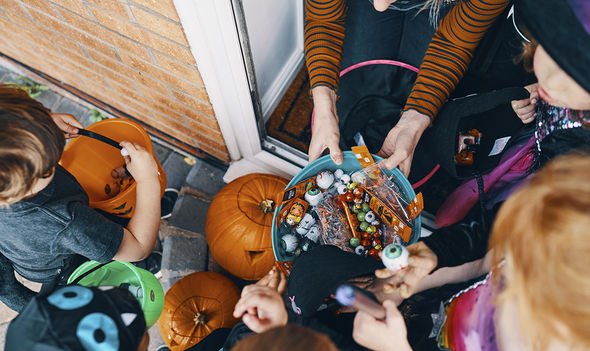 Halloween festivities were almost impossible last year because of the pandemic (Image: GETTY)

In China, the wonderfully-named “hungry ghost festival” involves people making offerings to ghosts, as, for the month of the festival, it is thought the gates of Hell are opened.

The event falls on the 14th or 15th day of the seventh lunar month (July or August), and, somewhat understandably, this is viewed as the scariest month of the year.

When feasting, diners may leave a seat at the table for a lost ancestor. People aim to feed hungry ghosts who have been wandering the land since the beginning of hungry ghost month. On the last day, when the gates of Hell are said to close again, Taoist monks chant to help drive the ghosts away.

One of the most famous events of the genre is the Dia de Los Muertos – or Day of the Dead – in Mexico. Like most, if not all of the ceremonies and traditions mentioned, it is not a version of Halloween, but it does share some of its characteristics.

Here, the point is to demonstrate love and respect for deceased family members by wearing ghoulish costumes and making generous offerings. It is thought the Day of the Dead originates from the Toltec, Aztec and Nahua peoples, but found a much wider audience after it featured in the 2015 James Bond film Spectre, with 007 foiling a bomb plot as parades of revellers surged through the streets of Mexico City.

Today’s festivities combine pre-Hispanic traditions with Christian feasts (All Saints’ Day and All Souls’ Day). Some dress as Catrina, the iconic figure, with painted skull faces. Altars are constructed in private dwellings and cemeteries, loaded with offerings, designed to welcome spirits back from the realm of the dead, and sometimes adorned with marigolds (petals scattered from grave sites to guide lost souls to their place of rest).

The air is heady with incense made from resin, thought to purify and transmit praise.

Short poems known as Calaveras are read aloud on TV and radio. Pan de Muerto (bread of the dead) features anise seeds and is decorated with bones and skulls. Sometimes th d they even feature tiny dough teardrops.

Back home (I live in what some would see as a horror setting, deep inside a Swedish forest) I’ll read Roald Dahl’s The Witches with my son, or this year I might introduce him to Ghostbusters. I’ll re-watch The Exorcist or Get Out or The Shining (once he’s tucked up in bed). I might re-read some of Shirley Jackson’s brilliantly unsettling short stories, or listen to the 1938 radio broadcast of War of theWorlds narrated by Orson Welles.

My life now is a far cry from my childhood and the pokey London flat when I had a sensible job. These days I’m the author of my own crime thrillers featuring a young deaf Swedish journalist,Tuva Moodyson, based in a remote fictional town and its nearby forest.

The drama is heightened by the claustrophobia of the setting and the heroine’s deafness. It’s a mix of dark humour, pathos, small-town isolation and unrelenting tension. And nothing suits that better than Halloween, which is centre stage in my latest thriller, Bad Apples, based on a hilltop cult.

None of us wants to be terrified in real life.

But confronting the thing we know must come at some point, or getting a taste of visceral fear, in the safety of your home, can be intoxicating. It’s why we ride roller coasters. Thrills, but no risk of genuine harm. After all, we’re all human, flesh and blood… aren’t we? Happy Halloween.