Sir Jonathan Van-Tam is leaving his post as one of the Government’s top scientific advisers, it was revealed today.

England’s deputy chief medical officer, who has become something of a household name, is set to exit his current role at the end of March.

He will then return to the University of Nottingham to focus on academic work.

Announcing his resignation, Sir Jonathan said it had been the ‘greatest privilege of my professional career’ to serve the UK public during the pandemic.

He paid tribute to Professor Chris Whitty, England’s chief medical officer, and other scientists working behind the scenes to keep the virus at bay.

Professor Whitty paid tribute to his counterpart, who is also affectionately known as JVT, and said he was ‘profoundly grateful’ for his support.

Health Secretary Sajid Javid said it had been an ‘honour’ to work with Sir Jonathan, and that he was ‘hugely grateful’ for the ‘vital role’ he had played in the pandemic.

It comes amid revelations over a party held in Downing Street during the first national lockdown. Boris Johnson issued a grovelling apology to the nation for the event yesterday, but insisted he thought it was a ‘work event’. 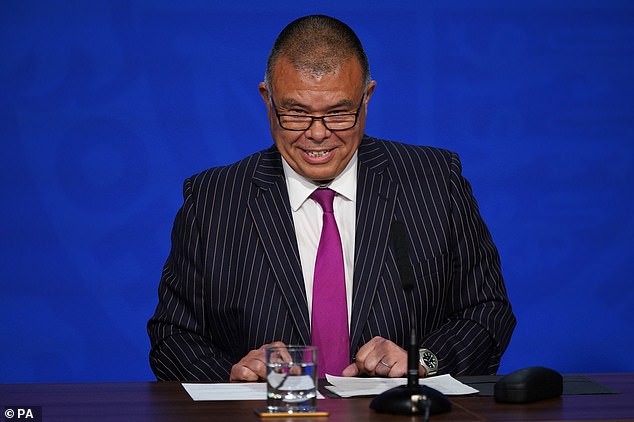 Sir Jonathan said: ‘My time as deputy chief medical officer has been the most challenging of my professional career, especially the Covid response.

‘We all wish Covid had never happened. Notwithstanding, it has been the greatest privilege of my professional career to have served the people of the UK during this time.

‘I want to pay tribute to Professor Chris Whitty, the CMO team, my fellow scientists, public health professionals and clinicians whose support, wisdom and energy has been inspiring.

‘There are countless numbers who work behind the scenes — all of whom have an unrelenting commitment to help and support the British public.

‘It has been an honour to work with them all.

‘I will continue to work until the end of March and look forward to the next challenge.’

Professor Whitty said JVT had been an ‘outstanding’ public servant, and and he was ‘profoundly thankful’ for his support throughout the pandemic.

He added: ‘His communication of public health advice and science has been remarkable.’

Health Secretary Sajid Javid paid tribute to JVT, saying it has been an ‘honour to work side-by-side’ with him during the pandemic.

He said: ‘JVT’s one-of-a-kind approach to communicating science over the past two years has no doubt played a vital role in protecting and reassuring the nation, and made him a national treasure.

‘I pay tribute to his relentless work ethic, sense of public duty and leading role in our incredible vaccination programme — on behalf of the Department of Health I wish him the best of luck on his return to the University of Nottingham.’

Sir Jonathan was awarded a knighthood in the New Year’s honours list for his services fighting the pandemic.

Professor Jonathan Van-Tam has been a straight-talking voice of calm authority in the midst of uncertainty during the coronavirus pandemic.

The softly spoken deputy chief medical officer (DCMO) for England is a regular and reassuring sidekick at the once-daily Downing Street briefings.

But, where some of his colleagues prefer a slightly more dispassionate and clinical approach at the podium, the 57-year-old has endeared himself to the watching public by highlighting the personal impact of the coronavirus, peppering his answers with references to his hobbies, his ethnicity and his family history.

Jonathan Nguyen Van-Tam was given his middle name after his grandfather who served as the prime minister of Vietnam between 1952 and 1954.

He was picked by the French in the early 1940s to be  the Governor of Northern Vietnam before becoming Prime Minister.

His son was General Nguyen Van Hinh — Professor Van-Tam’s uncle — the Chief of Staff of the Vietnamese National Army, the military force created by the French to fight for them against the Communist Revolution.

Jonathan Van-Tam’s father Paul fled the war in the 1960s, eventually settling in Lincolnshire where the deputy chief medical officer was born.

JVT attended Boston Grammar School in Boston, in the East Midlands county, where his father was a maths teacher. He graduated in medicine from the University of Nottingham in 1987.

After five years of hospital-based clinical medicine, Van-Tam trained in public health and epidemiology and developed an interest in influenza and respiratory viruses.

He became a Senior Lecturer at the University of Nottingham in 1997 before taking a number of high profile jobs as a medical director at British pharma giants.

Van-Tam returned to the public sector in 2004 at the Health Protection Agency Centre for Infections, where he was Head of the Pandemic Influenza Office until October 2007.

He has also chaired the European Centre for Disease Prevention and Control (ECDC) Expert Advisory Group on bird flu, and was a member of the UK Scientific Advisory Group for Emergencies (SAGE) during the 2009-10 pandemic.

Since 2014 he has been Chair of the UK government’s New and Emerging Respiratory Virus Threats Advisory Group (NERVTAG).

On 2 October 2017 he took up the role of Deputy Chief Medical Officer for England.