Stephen Sondheim – the composer and lyricist behind some of the world’s best-known musicals – has died aged 91.

Just some of his best-known works from a 60-year career include the lyrics for West Side Story and Sweeney Todd.

According to The New York Times, Sondheim’s death at his home in Connecticut was sudden – and hours earlier, he had celebrated Thanksgiving with his family.

Thank the Lord that Sondheim lived to be 91 years old so he had the time to write such wonderful music and GREAT lyrics! May he Rest In Peace🥲🎵 🎶🎵 pic.twitter.com/vshNSdkvpQ

Awarding him with the presidential Medal of Freedom in 2015, Barack Obama said Sondheim “reinvented the American musical”.

The then president added: “His greatest hits aren’t tunes you can hum; they’re reflections on roads we didn’t take, and wishes gone wrong, relationships so frayed and fractured there’s nothing left to do but send in the clowns.”

In December 2019, a theatre on London’s West End was named after Sondheim in honour of his 90th birthday – and it is currently home to Les Misérables.

During an interview with NPR in 2013, Sondheim said: “I love the theatre as much as music, and the whole idea of getting across to an audience and making them laugh, making them cry – just making them feel – is paramount to me.” 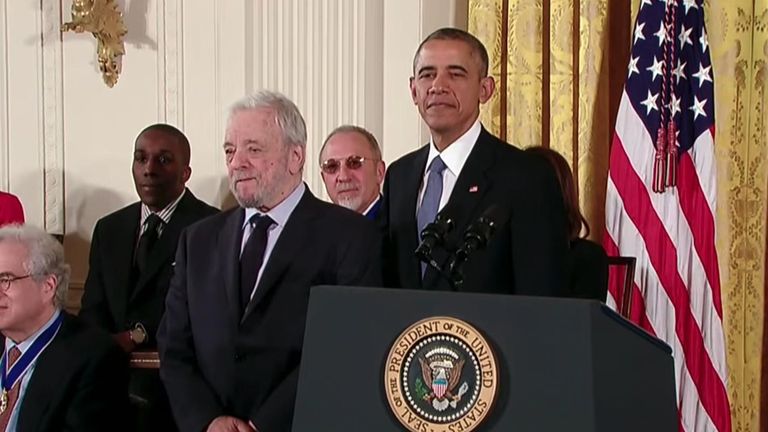 Performers and writers have paid tribute to the Broadway giant.

“We shall be singing your songs forever,” actress Lea Salonga said.

Andrew Lloyd Webber tweeted: “Farewell Steve, the musical theatre giant of our times, an inspiration not just to two but to three generations. Your contribution to theatre will never be equalled.”

And Elaine Paige said she was “devastated” to hear that Sondheim had died.

Anna Kendrick tweeted: “I was just talking to someone a few nights ago about how much fun (and f****** difficult) it is to sing Stephen Sondheim. Performing his work has been among the greatest privileges of my career. A devastating loss.”