Emma Watson has been accused of anti-Semitism by Israel’s UN envoy after the actress posted a picture on social media expressing support for Palestinians.

The Harry Potter star, 31, shared an image of a pro-Palestinian rally with the phrase ‘solidarity is a verb’ to her 64.2 million Instagram followers on Sunday.

The picture was posted with a quote from British-Australian scholar Sara Ahmed, which read: ‘Solidarity does not assume that our struggles are the same struggles, or that our pain is the same pain, or that our hope is for the same future.

‘Solidarity involves commitment, and work, as well as the recognition that even if we do not have the same feelings, or the same lives, or the same bodies, we do live on common ground.’

However, she was accused of anti-Semitism by Ambassador Danny Danon, Israel’s Permanent Representative to the UN, on Monday.

He tweeted a screenshot of the Instagram post with the caption: ’10 points from Gryffindor for being an antisemite.’ 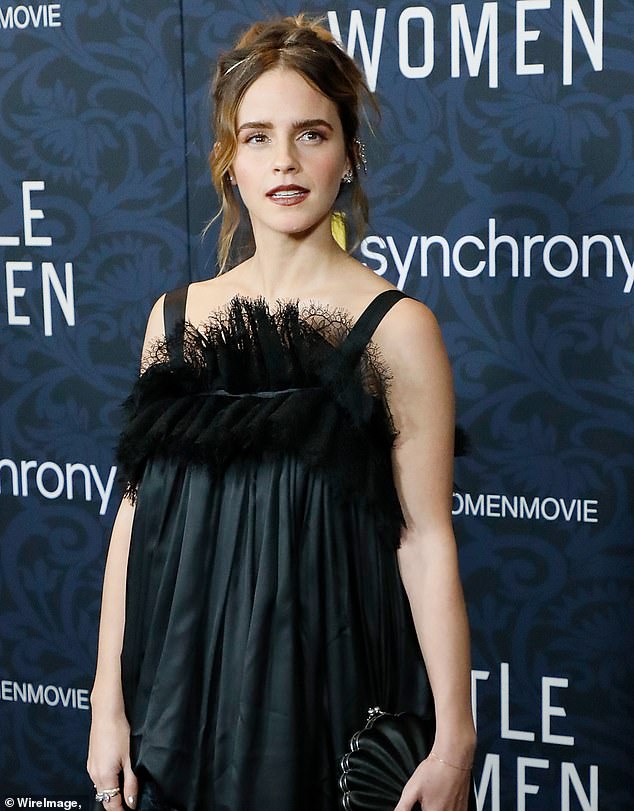 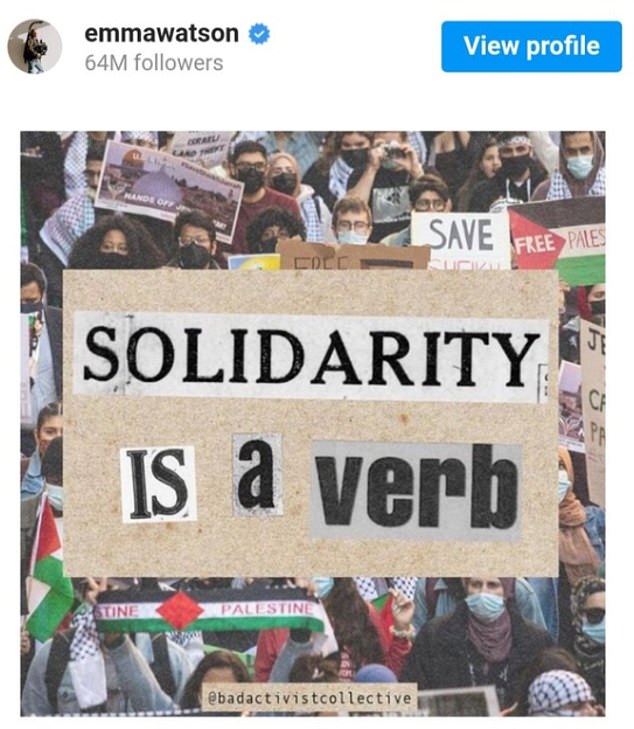 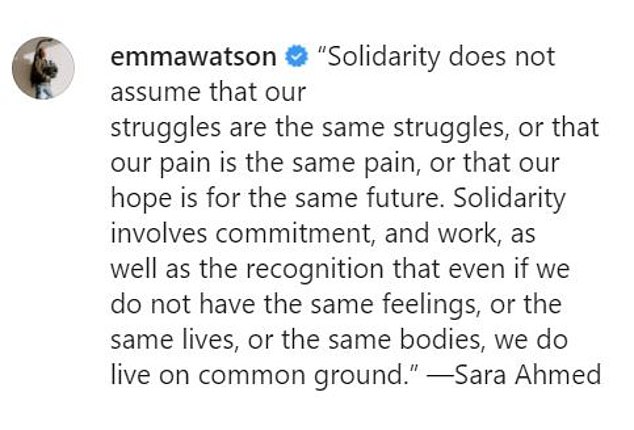 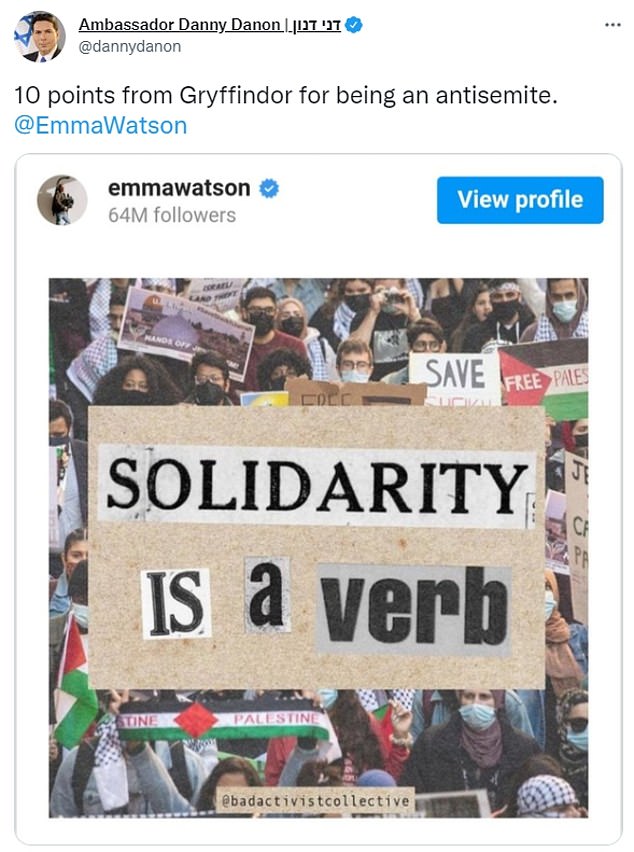 Ms Watson was accused of anti-Semitism by Ambassador Danny Danon, Israel’s Permanent Representative to the UN

Gilad Erdan, Israel’s Ambassador to the United Nations, also tweeted his dismay at the picture.

He said: ‘Fiction may work in Harry Potter but it does not work in reality.

‘If it did, the magic used in the wizarding world could eliminate the evils of Hamas (which oppresses women & seeks the annihilation of Israel) and the PA (which supports terror). I would be in favor of that!’

The Israeli dignitaries, though, have been criticised for overreacting and ‘misrepresenting anti-Semitism’.

Gilad Erdan, Israel’s Ambassador to the United Nations, also took to Twitter to share his dismay at the picture

Alex Sobel, Labour MP for Leeds North West, said: ’50 points from Likud for misrepresenting Antisemitism. This doesn’t help anyone in the Jewish Diaspora.’

Leah Greenberg, co-executive director of Indivisible Project, said Mr Danon’s tweet was ‘a perfect demonstration of the utterly cynical and bad-faith weaponization of antisemitism to shut down basic expressions of solidarity with the Palestinian people’.

It comes after Ms Watson reunited with her fellow Harry Potter stars to celebrate 20 years since the franchise launched with The Philosopher’s Stone – which included Richard Harris, Alan Rickman and Helen McCrory.

Speaking about appearing on the reunion without their late stars, Ms Watson said: ‘It’s obviously amazing to be back, but so many people we thought would be here for much longer like Helen and Alan and Richard.’

In October, Israeli officials accused acclaimed author Sally Rooney of ‘impeding peace’ in the Middle East by refusing a publisher’s offer to have her latest book translated into Hebrew. 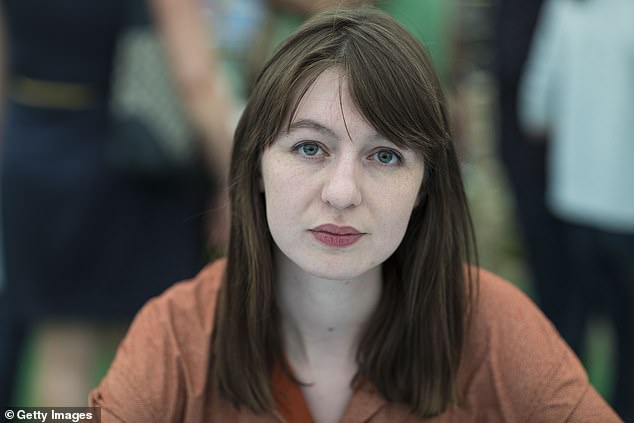 Sally Rooney, 30, was asked by Israeli publisher Modan to translate her new book -Beautiful World, Where Are You – but the author allegedly rejected the request

The award-winning Irish writer defended her decision to refuse the translation of ‘Beautiful World, Where Are You’ by Israeli publisher Modan, saying she supported a cultural boycott of Israel over its treatment of Palestinians.

She said the decision to reject the publisher – who she claimed had ‘not publicly distanced itself from apartheid’ – was an expression of solidarity with the Palestinian people ‘in their struggle for freedom and equality’.

But Israeli officials hit back, with a spokesperson for Israel’s Foreign Ministry declaring: ‘This is an unfortunate position that promotes narrow-mindedness and impedes peace, dialogue, or any meaningful change.

‘Literature is a tool to promote dialogue and conversation. There is something inherently flawed with an intellectual who refuses to engage in conversation, and instead supports the silencing of opinion.’