Rose Ayling-Ellis has been crowned the winner of this year’s history-making Strictly Come Dancing.

Ayling-Ellis, with professional Giovanni Pernice, beat former Great British Bake Off winner John Whaite to the coveted glitterball trophy, who was also making history as part of the first all-male partnership on the show.

Presenter AJ Odudu had also made it to the final three, but had to withdraw from the competition on Friday after sustaining an injury to her foot during the week.

EastEnders star Ayling-Ellis performed a Frozen-inspired quick step, as well as her couple’s choice dance (which included 10 seconds of silence to reflect her disability) during the final.

She had been the contestant to score the most maximum scores of 40 during the competition, and an early favourite to take the crown.

Ayling-Ellis also performed the traditional show dance, which was inspired by Romeo and Juliet, on the show, scoring her another perfect 40.

Pernice said after the announcement that Ayling-Ellis was “incredible”, adding: “Thank you to this beautiful young lady who made all my dreams come true.

“It took me seven years to get that thing [the trophy] and you became the best dancer, the best teammate I could have asked for, you are a dream, so thank you for everything.”

She said to Pernice: “I just want to say you’re so amazing, you pushed me to believe in myself more than I believed in myself.

“You are an incredible teacher and a wonderful friend. We’ve gone through a lot, and I just want you to know you’ll always have a piece of my heart.” 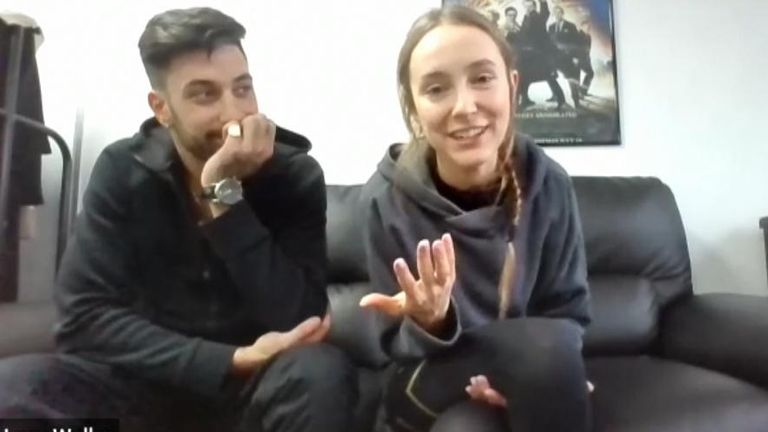 A few weeks ago, during a break in rehearsals, Ayling-Ellis told Sky News how proud she was to be part of the final group of performers.

“It’s nice to be part of history, being the first deaf [contestant] on Strictly,” she said. “I think it’s super important because it’s an opportunity to show on such a big platform with millions of people watching, and change their concept of what they think deaf people are like. I’m very proud of that.”

“Rose made history as Strictly’s first deaf contestant, and throughout the last 13 weeks she’s given millions of viewers an insight into her world, and amazed the judges with her outstanding dancing.

“Her victory isn’t just a personal achievement, but also a victory for the deaf community. She has shown that deaf people can do anything, if society addresses those barriers and provides the right access and support.

“Giovanni has been a perfect example of this, working with Rose and adapting his teaching style to help her succeed.

The 2021 edition, however, wasn’t without its hurdles, and saw two celebrities, McFly’s Tom Fletcher and comedian Judi Love, have to take a week off to isolate during the show.

Earlier on Saturday, Monye told Sky News that he believes celebrities who don’t get vaccinated are “selfish”, saying at a vaccine centre that “it is really important to do the right thing, not just for myself but for everyone else too”.