New Year’s Eve plans in England have been given the green light, as Sajid Javid confirmed the government will not be imposing any further restrictions before the New Year.

Mr Javid did not rule out the possibility of further measures being taken in January, adding that the government “will see” whether the data suggests they are needed.

However, I would urge everyone to continue to act cautiously given the rising number of Omicron cases.

Most importantly I urge everyone to get their first, second or booster jab without delay to protect yourselves and your loved ones. 2/2https://t.co/HFdDcrX3l4

Prime Minister Boris Johnson echoed the call for caution, adding: “Most importantly I urge everyone to get their first, second or booster jab without delay to protect yourselves and your loved ones.”

Mr Javid said: “Of course we look at the data on a daily basis, that hasn’t changed over the Christmas period, but there will be no further measures before the New Year.”

But he added: “Of course, people should remain cautious as we approach New Year’s celebrations, and you know, take a lateral flow test if that makes sense.

“Celebrate outside if you can, have some ventilation indoors if you can, please remain cautious.

“And when we get into the New Year, of course, we will see then whether we do need to take any further measures – but nothing more until then at least.”

Mr Javid said while “there is still a lot of uncertainty” around Omicron – which it is believed makes up “some 90% of cases” across England at present – there has been positive news in recent days that the variant is milder.

He said the need for restrictions would be kept “under review”.

England at odds with other parts of the UK

In other parts of the UK, post-Christmas restrictions have already been deployed.

Asked why the Scottish and Welsh governments and Northern Ireland executive have analysed the same data and introduced more measures, the health secretary reiterated that it is for each government to make decisions.

Mr Javid added that Downing Street is “very, very focused on vaccinations” – but that the government “will watch carefully what is happening in the hospitals”.

The number of people in hospital with COVID-19 in England has hit its highest level since March, but remains well below the January 2021 peak.

How COVID rules compare in each UK nation

There were 113,628 infections confirmed in England on 25 December after a rush to get tested in the days prior, latest data reveals.

Separately, Scotland has recorded the highest number of daily COVID-19 cases since the start of the pandemic, early data suggests.

Chief executive of NHS Providers Chris Hopson told Sky News earlier that there are some early positive signs that this wave will not be as bad as last January, which saw the country plunged into lockdown.

“We’re just not seeing those numbers at this point that we saw in January 2021.”

England is currently following Plan B, which includes guidance to work from home, mask-wearing in shops and other public settings and COVID-19 passes are needed to gain entry to some large events. 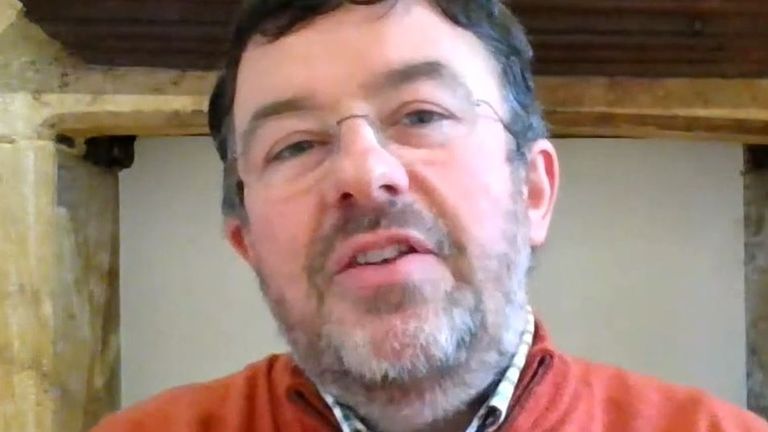 The PM has faced calls from some of his own Conservative backbench MPs to resist implementing further measures.

The decision to postpone the decision to introduce further measures into 2022 means parliament will not be recalled early from Christmas recess.

Nightclub closures are among new measures being introduced in Wales, Scotland, and Northern Ireland to tackle the spread of the Omicron variant of COVID-19.

“With infection rates so high, the government needs to come forward with a plan to enable schools and the NHS to run effectively through this latest wave,” Mr Streeting said.

“The government should publish, as a matter of urgency, the very latest data on hospitalisations and NHS staff absence rates, as well as up to date advice from SAGE, so that the public can be reassured that they are genuinely following the data and scientific advice and that Boris Johnson is not simply capitulating to his own opponents in the Tory party.”